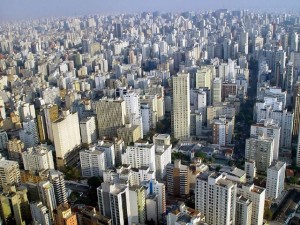 Houston is a long way from these snapshots of urban density, but new building laws would allow for more building in the city's outer regions.

Houston is a vast city composed of many neighborhoods, all of which differ by income, ethnicity and…land-use rules?

According to a Houston Chronicle report, inconsistencies in building laws have for years granted construction firms leeway on the nature of their developments, but now that the city is considering its first major changes to its deed restriction and land-use rules in more than a decade, density may now be king.

Known as Chapter 42, the revisions, which have not occurred since 1999, are primarily inspired by the spectacular growth projected for Houston in the coming years. U-Haul recently stated that Houston has been its number one destination for movers for three years in a row, and the city’s population is estimated to grow by 27,000 people a year in the coming decades. And such growth, said Mayor Annise Parker, requires alterations to existing rules, especially if Houston’s noted affordability is to continue.

To address that problem, Chapter 42 would substantially increase the density of Houston’s Loop, extending the 27-houses-per-acre cap that exists inside the Loop and extending it to the Beltway, effectively allowing builders substantially more opportunities to build on 5,000-square-foot lots; and more homes, the hypothesis goes, would equal cheaper housing, to the tune of $100,000, some argue.

Joshua Sanders, a lobbyist for Houston-area developers, said such a measure would keep more residents inside the city limits, reducing commutes and increasing property taxes.

“We’re not getting new single-family residential being built from 610 to the Beltway,” Sanders said. “We’re losing a lot of our population to the county and to the surrounding cities.”