The Power of Video for Real Estate Agents 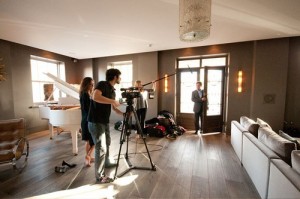 Here's how to use video the right way. Image by catch21productions via Flickr

“You do not want your video to look like the Blair Witch Project.”

Stephen Schweickart, CEO of VScreen, is referring to one of the seemingly minor mistakes some real estate agents make when filming videos of homes – that is, ending up with a picture jumpy enough to elicit dizziness and irritation in prospective buyers, courtesy of a handheld camera.

Schweickart is the founder of VScreen, who has made it his mission to assist clients, via an arsenal of strategic services, in the creation of videos that appeal to their target audiences. Part of VScreen’s work involves advising agents on the best practices for filming and promoting videos – a list that includes what kind of equipment to use, how much footage to shoot, the length of the final product, effective messages for each type of video and how much of a role the agent should play.

In order to best utilize videos of homes as a tool, agents should take advantage of the benefits the medium provides that photographs cannot. Primarily, videos have the ability to promote a lifestyle.

“Use video when you need to connect in a way that photography can’t – for example, to demonstrate the flow of the home, as well as capture emotionally appealing shots. The latter can be accomplished with shots of the nightlife, neighborhood, gardens, etc.,” Schweickart says.

Market updates and home tours tend to resonate most with buyers and sellers. Even so, investing time and resources in videos is pointless unless they offer value to viewers via the content and information they contain, according to Schweickart. When prospective clients see that an agent is offering value in his/her video collection, this impression will often translate into their overall view of the agent as someone who can effectively service them.

To this end, Schweickart cautions agents against playing a starring role in videos unless it is to convey what the agent has to offer clients in terms of knowledge and experience. Agents should resist the temptation to boast about accomplishments unless doing so will “sell” their services to clients, and then it should be done carefully.

“The focus of the video should be what the client wants, what will best educate the client,” says Schweickart.

Even the most well-made videos are ineffective unless potential clients, buyers and sellers actually watch them. A strong SEO ranking on heavily populated search engines will help ensure they are seen. Google in particular, Schweickart shares, ranks videos disproportionately higher than other forms of media; when videos are properly site-mapped and indexed, they are 53 percent more likely to achieve rank on the first page of results than other types of media.

“To be effective, you want to capture, through tagging and video description, what buyers and sellers are Googling first – for example, city location vs. street location,” he says.

The impact is two-fold. Video thumbnails on Google’s universal page generate a 41 percent higher click-through rate than other types of content. The thumbnail will then take the viewer to the agent’s website where the video is embedded. Videos typically keep visitors on websites approximately six times longer than if there are no videos, giving the agent six times the opportunity to capture the visitor as a lead.

“Ultimately, this is the ROI of video, but it must be done the with right knowledge behind it,” Schweickart says. “This is where VScreen comes in; we possess the expertise to guide agents in the right direction.”

Additional, and equally important, vehicles for promotion include video-centered websites like YouTube (the second most popular search engine in the world behind Google), Facebook (the second ranked video portal in the world, behind YouTube), TubeMogul and Traffic Geyser. Videos should always be featured on the agent’s website, as well.

“YouTube heavily dominates the industry on the video portal side,” Schweickart says. “Facebook is also becoming one of the top video portals in the world; social media is important to utilize overall. TubeMogul.com creates a ripple effect; you upload a video, and it syndicates to all video portals. Traffic Geyser is another good tool to syndicate [and] blast your video out to the masses. Including videos on your own website is huge, as is including them in your monthly newsletter where users can click back to where they are embedded on your site.”

Once the video has lured potential leads, length is a factor that comes heavily into play. Videos should be kept short, with a maximum duration of 90 seconds.

“Statistically, the shorter the video is, the further into the video the viewer will watch, which creates a lower bounce rate,” Schweickart says.