Will it play in Plainfield? Coldwell Banker’s rebranding experiment 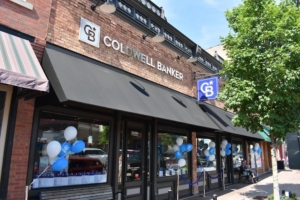 Every Tuesday throughout the summer, Plainfield, IL’s main drag turns into a family friendly spectacle of classic cars, music and food as the local chamber of commerce closes down the streets for Cruise Night. To Mike Prodehl, president and CEO of Coldwell Banker – The Real Estate Group, Tuesday, July 2, seemed like the perfect moment to unveil the newly rebranded Plainfield office. “It’s amazing how many people noticed it,” Prodehl said of the change to their 100-plus-year-old brick building.

This microcosm of change on a classic main street office building is part of a much larger wave. Coldwell Banker has embarked on the implementation phase of its new identity, and Plainfield was one of a small handful of beta testers. But with top-level personnel changes and shakeups in Coldwell Banker’s Chicago area offices over the past year, on top of stock market jitters experienced by the company’s parent brand, this moment could be seen as a precarious one for the 100-year-old brand.

The choice of this particular office in this particular town wasn’t random. David Marine, chief marketing officer for Coldwell Banker, told our sister publication, Chicago Agent magazine, that company executives picked out offices that would represent a variety of conditions — urban vs. suburban, standalone offices vs. strip mall locations — to test out the new designs that are part of what they call Project North Star. “Plainfield, IL, has a very downtown, ‘Mainstreet, U.S.A’ type of feel,” he said. “We wanted to see how it works in a sort of walking community.”

First announced in March at the company’s annual Gen Blue conference, the new logo has stirred up a fair amount of chatter, both from supporters and detractors, in the intervening months. And though it is generally being referred to as a beta test, much of the new look is already set in stone. “The North Star mark is here to stay,” Marine said.

Any brand refresh will suffer pushback, and the fact that Coldwell Banker has been using the same general marking since the 1970s only makes the backlash — particularly from established agents — more inevitable. As someone who was part of focus groups on the new logo that started last summer, Prodehl said he has felt the need to be both a champion for change and a critic or devil’s advocate, reminding company brass and marketing executives to always keep in mind what the public and agents will make of the new look. He did note that he heard from some agents who panned the logo as looking too much like a flag or baseball team logo.

But the symbolism of the North Star as a steadfast guide won Prodehl over. He said clients have told him the role of real estate agents as pilots is the reason they hire them in the first place. “Us being the ones who guide them through the process is what is going to keep us relevant in the transaction,” he said.

The old logo, affectionately dubbed as having been written in ‘Star Wars font,’ is nonetheless well-known. Looking at the larger brand may reveal some higher-level impetus behind the shift. Coldwell Banker parent company Realogy Holdings Corp. has had a rough ride on the stock market lately, and while this may have to do more with fears of the disruption of established brands than it does branding, it certainly doesn’t bolster the arguments of those who want to stick with a look and feel developed decades ago. Also, another major player under the Realogy brand, Century 21, recently undertook a new branding that isn’t too far off from the new Coldwell Banker logo.

Marine denied that there’s an overall plan to bring the whole Realogy family under a similar look and said recent stock swings have nothing to do with the shift either. “There’s no interest or desire to bring the two brands together,” he said, adding that, as for similarities between the two new logos, “They both have a ‘C’ in them.”

Instead, Marine said that the shakeup came out of conversations that have been happening virtually since he started with the company some 17 years ago. “The reason for the rebrand stemmed from something I’ve heard off and on for as long as I’ve been here: ‘What are we going to do about this logo?’” he said, adding that there has been a feeling for quite some time that “our identity might be holding us back.”

Marine said the search for a new identity didn’t begin from within the industry. “We did not look at real estate brands for inspiration; we looked at fashion brands,” he said. They examined how the logo might present itself not only on yard signs, but also on socks and pocket squares. “We wanted to make sure that the logo looks good on what we see as the greatest product in real estate: our agents.”

From the reactions that Prodehl has seen from his associates and the public alike, the fashion focus paid off. “It turned out great — the agents love it,” he said. “The look of the logo on the apparel has grabbed a lot of attention.”

In real estate, the appeal of brokerage branding is arguably more important than many other industries because agents — particularly teams — can struggle to integrate personal branding with the larger company’s look. Marine said part of the blame for the proliferation of individual marketing plans may indeed lie with outdated branding at the brokerage level. “Agent branding has exploded because a lot of agents feel like they need a brand because they don’t have one,” he said, adding that part of the rebrand plan was to integrate the company with this emerging reality. “We’re showcasing how our brand can still look beautiful next to yours… We want to make sure our brand is flexible and fashionable.”

Prodehl called out the increased flexibility of the logo as a major asset in his efforts to work on marketing with teams large and small. “The new look is much easier for them to brand with their brand,” he said. He added that moving to a more square-shaped brand that can be used in icons makes it easier to “drop in” the mark in a variety of places, online and off.

While Coldwell Banker has been careful to roll the new logo out slowly, Marine said he’s seeing more demand for change than he thought he would at this point in the game. “One of the most surprising things I’ve learned from this is how many people want it sooner,” he said. “Every week I get a call from a company who wants to change their signage to something new.”