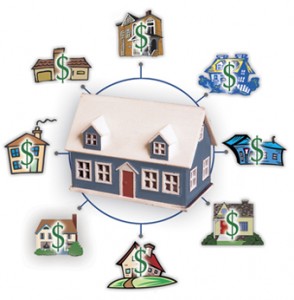 For the second straight month, the Case-Shiller unveiled data for an increasingly weak housing market.

Standard & Poor’s released the latest resultsof its influential Case-Shiller Home Price Indices just moments ago for the month of October, and like the previous collection of data, it shows both monthly and year-over-year declines for housing values in the vast majority of U.S. metropolitan areas.

Although only one of the metropolitan areas – Phoenix – had a small monthly increase, 14 of the cities did show annual improvements, though only two of the cities, Detroit and Washington DC, posted positive annual returns.

The Case-Shiller, unfortunately, does not track home values in Houston, but it does follow Dallas, where home values were relatively strong both monthly and year-over-year. Monthly, Dallas home prices declined 0.9 percent, while annually, they were down just 0.6 percent, perhaps a sign that the Dallas (and Houston) market missed out on the worst of the foreclosure scares.

“Chicago, Cleveland Detroit and Minneapolis all posted monthly declines of 1.0 percent or more in October,” said David M. Blitzer, the chairman of the S&P Indices index committee. “These markets were some of the strongest during the spring/summer buying season … Atlanta and the Midwest are regions that really stand out in terms of recent relative weakness.”

Blitzer said that though there was some positive news in the indices, it mainly showed a weak housing market going in to the final months of 2011 – and, like most of the good housing news today, it was restricted to the multifamily sector.

“Some of the other housing statistics posted relatively healthy figures for November, but it seems that most of the good news was confined to the multi-family sector,” Blitzer said.

As of October 2011, average home prices across the U.S. are back to mid-2003 levels. Measured from their June/July 2006 peaks through October 2011, the overall declines for the 10-City Composite and 20-City Composite are -31.9 percent and -32.1 percent, respectively. The recovery from recent lows are increases of 2.4 percent and 1.9 percent, respectively. The 10-City Composite hit its crisis low in April 2009, whereas the 20-City reached a more recent low in March 2011, though the latest graphs from Calculated Risk show that when seasonally-adjusted, this latest release of data actually represents new post-bubble lows in home values.