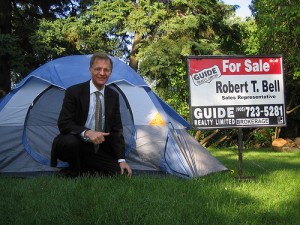 Robert T. Bell, a sales associate with Guide Realty Limited in Oshawa, Canada, has distinguished himself in an unorthodox way – sleeping in a tent in his backyard.

There are a number of avenues that real estate agents pursue in distinguishing themselves through their marketing. Some send out e-newsletters to their entire database; some advertise in credible e-newsletters from real estate publications; some make their own YouTube videos; some offer refined print advertisements; and some invest in marketing packages on syndication sites. Or, if you’re Robert T. Bell, a sales representative with Guide Realty Limited in Oshawa, Canada, you sleep in a tent in your backyard, document it and post the photos online.

Bell’s initial motivation for the tent, as he explained to us, was quite simple. Browsing the Internet one night in the summer of 2010, Bell came upon a Facebook comment from one of his friends, who mentioned they had gone camping. The comment led Bell to a realization.

“I got thinking – I had not went camping in years,” he said.

So, resurrecting an old tent he used when he was a child, Bell slept in his backyard a couple nights later, and, after a wonderful night’s rest, he decided to continue his camping venture, writing about his little experiment on Facebook. After his Facebook dispatches attracted attention, Bell said, he decided to use it to his advantage.

“There was a great response from people asking about the tent and wanting to see photos,” he said. “At that point my sales side kicked in – I put one of my for-sale signs in front of the tent and posted a photo of myself with it.”

As time has passed, the concept has matured, with Bell sharing more and more of his experiences with his increasingly growing online audience. He has written blog entries about the wind in the trees, waking to singing birds and the area’s raccoons  and taken photographs of the rabbits that periodically visit him. The rabbits, Bell explained, sparked a humorous interaction with his readers.

“Someone then posted a Monty Python clip about killer rabbits,” he said.”So of course I made them my enemy and put up posts about them, usually calling them ‘Alien Killer Bunnies.’ To protect myself I have an invisible imaginary dog – someone named him Harvey.”

Harvey is a recurring character in Bell’s photos, and though the raccoons also made an appearance of sorts, it was in a video Bell shot and uploaded to YouTube:

“Advertising From Many Angles”

Going on three years now of sleeping in his tent, Bell said he has been taken aback at how popular the project has become.

“I have been amazed how many people have seen and commented on my Facebook posts, and to a lesser extent the videos,” he said. “When I say comment, I do not just mean comment on Facebook; I mean random strangers on the street.”

And though Bell cannot point to any specific real estate deals or leads that resulted from his sleeping in a tent, he said it has “definitely” raised his profile when engaging with the community; even existing activities, such as his promotions of locally grown foods and a weekend flea market both where he sells antiques, have been bolstered by his tent activities. Additionally, Bell is hoping to use his tent-celebrity to build upon other activities and community outreach initiatives, particularly his work with the homeless and the environment, which will culminate in a tent-themed fundraiser he and another broker are hoping to launch in 2013 with the cooperation of other real estate offices.

In the end, Bell said his approach to real estate marketing is multifaceted, and an emphasis on uniqueness is what will help agents stand apart.

“I look at advertising from many angles,” Bell said.”Everyone can do the easy stuff – being creative makes you stand out. Plus it is fun.”