Keeping it Real with Home Prices 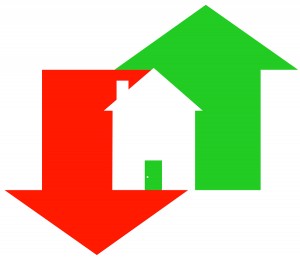 Standard & Poor’s released the latest Case-Shiller Indices yesterday, reporting gains in metropolitan home prices for the fourth straight month. Those indices, however, rely on nominal prices, not the “real” prices that consider inflation. But thanks to Bill McBride of Calculated Risk, we now have real data on the indices.

Real prices are determined by using the Consumer Price Index, or CPI, which measures inflation by tracking the prices of a number of goods and services when compared to a base year. In the case of housing, McBride used the 1999/2000 price levels as the base.

The two graphs, which chart the quarterly Case-Shiller, the 20-city composite Case-Shiller, and the CoreLogic home index, are roughly similar in shape, in that they feature huge increases from January 1997 to January 2006, followed by steep declines to the present day. But as always, the details are what matter.

McBride’s graph features a lower peak of the 20-composite index at 180, compared to 203 for the nominal graph, and it also has a steeper decline to 108, compared to 140.

The most important difference between the two graphs involves that decline, as it comments on where the index is relative to past markets. In the nominal graph, prices rebounded in 2008, and the index has grown sideways every since, preserving 2003 levels. The real graph, though, shows an entirely different, far more telling scenario – prices have continued dropping the last three years, and the index is now at 1999/2000 levels, meaning an entire decade of housing gains has been wiped clean by the downturn when inflation is factored in.

“In real terms, all appreciation in the last decade is gone,” McBride wrote.