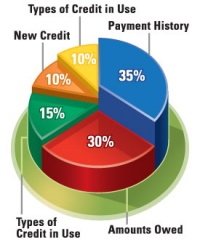 The credit rating system could be in for quite an overhaul in 2012, and simple pie charts like the one above could be a thing of the past.

In an effort to better represent the financial stability of potential homebuyers, Fair Isaac Corp. (FICO) has announced a collaborative venture with CoreLogic to broaden the base of factors it utilizes when rating clients of Freddie Mac, Fannie Mae and Federal Housing Administration loans.

Traditionally, FICO only analyzed the client’s credit history, but now, with CoreLogic on board, it will begin considering payday loans, evictions, child support payments, and even information on the status of utility, rent and cellphone payments, in future reviews.

Joanne Gaskin, the director of product management global scoring for FICO, said she and the company are intrigued to see the market results of the new data.

“We’re fascinated to see, as we get into the data, whether that may expand the universe of people who can get a mortgage,” Gaskin said. “Banks are saying, ‘How do I find ways to safely increase loan volume, to find the gems out there?’ ”

Michael Turner, president of the Policy and Economic Research Council, said that one of the benefits of the new credit ratings would be greater transparency between buyer and lender.

“You’re trying to convince someone to loan you an awful lot of money at a low interest rate,” Turner said. “Only you know whether you’re going to pay it back. There is a harmony in this data exchange.”

Additionally, the new data may reveal facets to a buyer’s history that credit lines typically do not cover. David Pendley, the president of Avenue Mortgage Corp., said he once had a client who was harmed in the home buying process because of his historical resistance to credit.

Pendley said that with new avenues of inquiry available to agencies, the client’s credit rating may be higher.

Certain elements of the new ratings, though, are generating controversy, particularly payday loans. Chi Chi Wu, a staff attorney at the National Consumer Law Center, said that including such loans could eliminate lower income buyers from the process.

“Payday loans are extremely onerous,” Wu said. “They trap people in a cycle of debt. To report on them is to cite that person as financially distressed. We certainly don’t think that’s going to help people with a credit score.”

Credit scores have been around since the ’50s but have grown increasingly important since 1995, when Fannie and Freddie announced they would use the ratings to gauge buyer-readiness for a home loan. The new ratings system is set to take affect in 2012.