The Delightful Devolution of the American Home 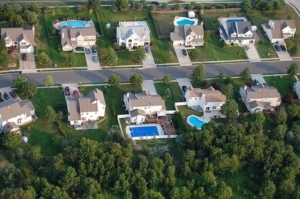 McMansions, like the homes featured on this street, were increasingly popular during the boom, but thankfully, new homes have scaled back their excesses.

During the boom years, bigger and better was the mantra for everyone in the housing market, most of all developers. “McMansions,” as they were called, sprang up in suburbs across the country, and everybody seemed to have the financing to buy them.

Now, however, many of those McMansions are vacant – and appear more excessive with every glance. Thankfully, the slowdown in housing has inspired a devolution, of sorts, in home building, and a recent Wall Street Journal piece chronicled some of the new blueprints for the American home.

One example Kalita mentions is formal living rooms. Rather than having a separate, formal room that garners little use, the new trend is building an open living space that encompasses not just the dining area, but the family room and the kitchen.

“We used to put the Christmas tree in there and that was about it,” said Colleen Otto of her old home’s formal living room. A dental assistant in Indianapolis, Otto downsized with her husband Doug. “We like this [new] house because we don’t feel there is any wasted space.”

Another example is the removal of “breakfast nooks,” where small tables were used specifically for breakfast. Instead, Kalita writes that builders are now installing sliding glass doors that emphasize the outdoor facilities of a home.

“We installed a small seating area with a fire ring to make it a real outdoor living space,” Rocha said. “It makes the house seem bigger.”

Perhaps the most practical of the adaptations, builders are no longer building secondary staircases in the back of the house (often to complement the already excessive winding staircase in front) and are instead leaving the rear space open for an elevator.

More and more buyers, Kalita writes, are realizing that stairs may not be an option 20 or 30 years in the future, and they’re deciding to leave their options open for future, practical improvements.