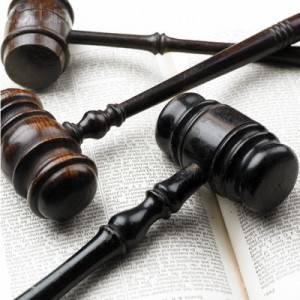 The gavel may fall on Quicken Loans, as the lender is being sued for unearned fees.

A lawsuit involving lender Quicken Loans began its arguments before the Supreme Court today, with the future of closing fees that lenders charge hanging in the balance.

Officially called Freeman v. Quicken Loans Inc., the case originated in 2007, when the Freeman, Bennet and Smith families obtained mortgages from Quicken Loans and were charged what the families considered unearned fees on the mortgages.

The Freemans and Bennetts were charged “loan discount fees” and the Smiths with “loan origination fees” and “loan processing fees.” According to court documents, the first two families allege that the interest rates on their loans were not reduced to a corresponding amount to the fees that Quicken Loans charged, while the Smiths allege that the origination fees were a doubling of the processing fees.

At the heart of the case is the Real Estate Settlement Procedures Act (RESPA), a law that prohibits servicers from charging unearned fees if the fee is divided between two or more parties (in other words, it prohibits the charging of kickbacks). The Freemans et. al. are arguing that RESPA should apply to unearned fees even if the servicer does not split the additional, unearned earnings with another party.

Thus far, they have been unsuccessful in their arguments. In both preceding cases before the lower Federal courts, Quicken Loans has asked for a summary judgement in the case (that the case be thrown out before arguments commence), arguing that RESPA only applies to fees that are divided between parties. The courts granted Quicken Loans’ request, and the families have appealed the decision to the Supreme Court.

Though Quicken Loans prevailed in the earlier cases, Ronald Mann, a Columbia University professor of law and blogger for SCOTUS Blog, the Supreme Cout’s official blog, wrote that he anticipates a much different outcome for the case before the nation’s highest court.

The problem, Mann wrote, is that Quicken Loans has a difficult case to argue, given the precarious relationship the case has with RESPA’s application.

“The central problem for Quicken is offering any reason why Congress would want to prohibit an unearned fee if it is split between two parties but tolerate it if the originator keeps the entire fee,” he explained.  “Quicken does a workmanlike job here of presenting the classic argument that Congress is entitled to regulate incrementally and pick and choose among the types of conduct it will remedy at any particular time. But the weakness of the statutory argument coupled with the strange policy outcome leaves Quicken in a tenuous position for next week’s oral argument.”

“My best guess is that the result here will be a straight-on reversal of the lower court’s strangely narrow reading of RESPA,” Mann wrote.