Have We Been Looking at Inventories All Wrong? 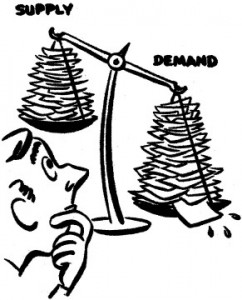 For years, outlets have argued that lower inventories would equal better prices, but recent developments could be defying that logic.

For nearly four years now, the narrative in housing has been essentially unchanged – as soon as inventories go down, and the vast number of vacant, excess homes are cleared from the market, prices will increase and a housing recovery can truly begin.

As Diana Olick of CNBC points out, though, that economic ideology may no longer apply to the present housing situation, and the relationship between price and supply could be a complete inversion of the conventional wisdom.

The key, Olick writes, is the inventory of foreclosed homes, and how home values seem to fall, not rise, with the fewer foreclosures that are listed for sale.

“Foreclosures are in high demand right now, and organic, non-distressed sellers are still not coming back to the market,” she writes. “Without the foreclosures, there really is no competitive market.”

The absence of that competitive market, therefore, negatively impacts prices.

And Olick has the data to back up her idea. Inventories are down to their lowest levels since March 2005, yet home prices have fallen, not risen, in the meantime (they’re 2 percent lower now than in 2011). Though it appears, on first glance, that Olick is manipulating the data here – ignoring the fact that the robo signing scandal pushed foreclosures underground, and that those properties are now resurfacing – she addresses that contradiction head on later in the main thrust of her article.

Though banks are indeed releasing more foreclosures to the marketplace, they are doing so in a meticulous fashion. In order to preserve prices, banks will only release inventory to meet consumer demand, so not only will inventories remain high, but bidding wars will ensue for the few cheaply-priced distressed properties, Olick writes.

“Sales of existing homes in the West, which comprise the hardest hit states of Arizona, Nevada and California, jumped 8 percent in January month to month,” she writes. “More than half of sales out West are foreclosures and short sales. Demand is definitely rising, but only on the lower end.”

As long as this continues, Olick argues, housing cannot reasonably recover as the “organic, non-distressed sellers,” as she describes them, make up less and less of the active housing inventory; and those sellers are the ones that housing needs to lead a recovery and contribute to real, effective price appreciation.

What do you make of this perspective? Are we on to something, or is this reading too much between the lines?