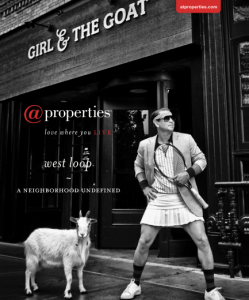 If it doesn’t catch your eye, nothing will. A black & white photograph showing the unassuming facade of Girl & The Goat, the popular West Loop restaurant, yet standing in front of it are two highly conspicuous subjects: a literal goat, staring blankly at the camera, and a gentlemen in a ruffled skirt who, holding a tennis racket and looking off into the distance with an expression and pose suggestive of a grand adventurer from a Saturday matinee, looks like a curious hybrid of Thaddeus Wong, co-owner of @properties, a Chicago-area brokerage, and Richie Tenenbaum, Luke Wilson’s character from the classic Wes Anderson film The Royal Tenenbaums.

Except here’s the truth: that is @properties co-owner Thaddeus Wong, and he is indeed summoning the look and attitude of Richie Tenenbaum! For some perspective on this intriguing advertisement, we went straight to the source – Thaddeus Wong himself.

The Love Where You Live Neighborhood Campaign

The ad originally appeared on the inside back cover of the August issue of CS magazine, a luxury publication that is part of the Modern Luxury line of magazines. As Wong explains it, though, it’s just one part of an entire campaign, the “Love Where You Live Neighborhood Campaign,” that draws attention to the many unique neighborhoods of Chicago; indeed, in addition to the West Loop, there have been ads for the Gold Coast, River North, Bucktown, Lakeview and Lincoln Park, and all have been consciously designed to reflect, in the zany, unorthodox approach of the campaign, the unique characteristics of that neighborhood, and ultimately, Wong says, show @properties to be a local, independent brokerage that understands the city.

The West Loop, Wong says, is a perfect example of this. The tag line for the ad, “A neighborhood undefined,” describes the diverse, multifaceted nature of the West Loop, how the area encompasses not only Girl & The Goat and other fine dining establishments, but also the United Center (where the Chicago Bulls play home games), the Chicago Fire Academy, the meatpacking district, the fresh fruit and produce at the Randolph Street Market, and many, many other features that, though seemingly contradictory, complement one another in a distinctly West Loop kind of way.

The ad’s visuals, then, encompass all of that diversity. Each neighborhood ad features one of the area’s hot spots (Lincoln Park’s features the Sweet Mandy B’s bakery, a popular spot for sweets and dessert items; the Gold Coast’s features Gibson’s, a noted steakhouse), so the West Loop ad features Girl & The Goat, which Wong describes as the hottest restaurant in the area, and a real goat and human model to personify the restaurant’s name. And then, things get interesting.

In order to capture the area’s diversity, Wong explains, he dressed as the girl, and the cross-dressing nature of the ad flipped the name of the establishment on its head – symbolizing that the West Loop has no one defining feature, that it’s an area of dozens of features that contribute to its identity.

If all of those rhetorical flourishes seem a little dense for you, have no fear – that’s where the ad campaign’s sense of humor takes over. Intentionally unorthodox and exaggerated to grab, if not pull, the reader’s attention, the ads utilize a hodgepodge of images, taking a familiar scene from a given neighborhood – say, a mom and a couple of excitable kids in Lincoln Park (Lincoln Park is among the more family-friendly areas of Chicago), or hipsters in Bucktown (similarly, hip youth flock to the Bucktown/Wicker Park area) – and meshing it with Wong’s Richie Tenenbaum character, a figure Wong consciously chose for his awkward, angular presence.

“Richie didn’t really fit in; he was his own character in the family,” Wong says, referring to the eccentric Tenenbaum family that The Royal Tenenbaums follows. “He was always doing the wrong thing at the wrong time.”

That presence, then, works on the ads.

“[He] forces the viewer to stop and wonder, ‘what is he doing there?” Wong says.

And that curiosity, Wong concludes, is the key ingredient to the ad’s humor, the way that a seemingly random assortment of images and characters – no matter how nonsensical – can still appeal to our innate sense of humor.

“If it didn’t make sense subconsciously, you wouldn’t laugh,” Wong explains. “It forces someone, as their pacing through a magazine, to stop, laugh and WTF?”

As long as that process occurs, Wong says, he’s succeeded at putting @properties on the minds of the readers, and has furthered the brokerage’s presence in the Chicagoland real estate market. And so far, Wong says, the reaction throughout Chicago has been great, especially among the West Loop/Gold Coast consumers and businesses who saw the brokerage’s ads for those respective neighborhoods.

“That ad and our Gold Coast ad – people loved those,” he says. 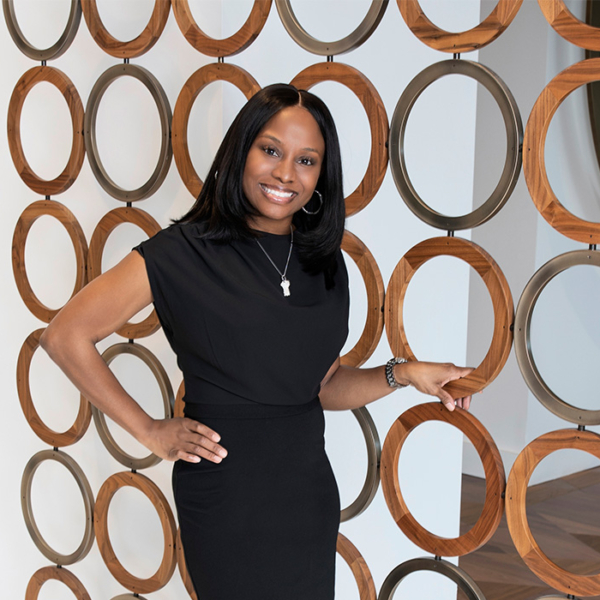