The Sheer Anarchy of Real Estate in Cuba 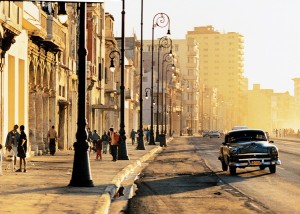 For the first time in decades, Cubans are able to buy and sell property, though the real estate market doesn't have a whole lot of regulations.

In the last few years, there have been some big changes in Cuba. Fidel Castro is no longer in power, having passed the baton to his young brother Raul; citizens are allowed to purchase cell phones; and now, a real estate market has developed in the country – and the result has been sheer anarchy!

As National Geographic recently reported, Cubans are now able to buy and sell real estate for the first time in decades, but their market is bereft of all the guidelines, regulations and safeguards that define real estate in America.

Indeed, as Corey Curwick Dutton wrote further in the Niche Report, aside from one regulation (Cubans are only allowed to sell real estate to citizens and permanent residents of the country) the Cuban real estate market is among the freest in the world:

“Take a moment to imagine a life in real estate without fancy signage, licensed agents, or a formal marketplace to buy and sell,” Dutton wrote. “This is the reality of real estate in Cuba today.”

Of course, the laissez-faire madness of Cuba’s real estate stands in stark contrast to the complex system of the U.S., which has been developed and refined for the last 100 years.

Tom Huckabee, an agent with Keller Williams Realty in Conroe, said he could not even imagine working in a market like Cuba’s.

Huckabee did add, though, that the old-school signage model in Cuba, with its hand-written signs in public places, is a practice he still utilizes in certain markets. When a property is unorthodox, he’ll often place hand-written signs on the highway to generate interest; for instance, Huckabee has used the strategy for a residence that sits on five acres and features two barns.

Also, Huckabee said hand-written signs remain very prevalent in Hispanic communities, where signage on yards is more likely to be seen than on HAR.com.

But what are your thoughts? Given its political situation, will Cuba’s real estate market incorporate brokerages, associations, MLS’s and other guidelines slowly, or could we soon see a property boom on the levels of what developed in China?