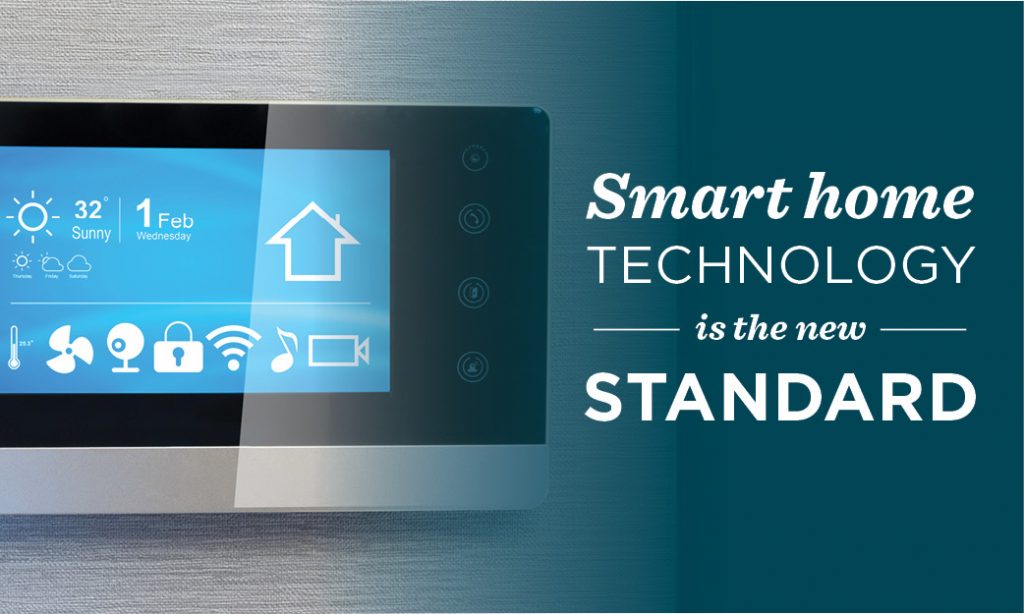 In today’s digital age, novel inventions that once seemed like an unrealistic dream such as self-driving cars and virtual reality have become an integral part of everyday life. Just as Tesla is revolutionizing the automobile industry, smart homes are doing the same in the housing market.

Technology in the home is no longer just for the rich and famous, as smart technology is becoming increasingly affordable. Despite what many may think, these newly designed smart homes have attracted the interest of a diverse variety of buyers, and many are beginning to expect high-tech features in their new abode. Both security and convenience benefits are what attract potential buyers to smart home technology the most.

Amazon has began to dabble in the smart home business as it recently announced a partnership with Lennar to provide Alexa-enabled smart homes. Pulte Homes also partnered with the tech giant, providing smart technology in every newly-built Pulte, Centex, Del Webb, DiVosta and John Wieland home as the new standard, including the ability to customize their specific in-house features.

More than 40 percent of Realtors said clients were interested in smart home devices while 22 percent said they were interested in whole home technology, according to the National Association of Realtors. Similarly, security and privacy were the top issues discussed with clients, followed by cost. Some of the most important high-tech features to clients are locks (37 percent), lights (29 percent), thermostat (26 percent) and cameras (19 percent).

“We’ve reached a point where the majority of consumers aren’t only willing to invest in it, but they are expecting their next home to be connected,” Grayling Love, a member of the NAHB Leading Suppliers Council told BuilderOnline.

Smart technology also increases the home’s value, potentially 3 to 5 percent, according to the NAHB and the Consumer Electronics Association. A new survey by Coldwell Banker suggests that 72 percent of millennials are willing to pay $1,500 or more while 44 percent would pay $3,000 or more to make their home smart.

Smart home technology is for everyone

There are features designed to suit every type of homeowner and each one is beginning to find their fit. Young couples planning on having children, for example, are perfect candidates for smart security as they look for a safe place to raise their families. Through their smartphone, parents can monitor who is coming in and out of the house as well as make sure the lights are on when the kids get home. And, for peace of mind, parents can receive a text when their kids arrive home safely based upon a recorded trail of activity within the house.

While millennials thrive off of having the latest and greatest technology, they are not the only age group interested in smart homes. Seniors are also interested in smart technology in the home. Possibly looking to downsize to fit their current needs, convenience is a major factor for older buyers. For them, smart locks are quite useful. This technology has the ability to keep out unwanted guests, while granting access to family, caregivers or even first responders in emergency situations. While many seniors spend a considerable amount of time in more than one place, some may be interested in technology that allows them to control one house in Florida, for example, from another home in Arizona.

Combining the increasing affordability of smart technology with the wide range of newly designed features makes for a market in high demand of smart home technology. Allied Market predicts that the market will grow 29.5 percent through 2020, at which point the smart home market will be worth roughly $35.3 billion.

“No matter what is the final number, the market, experts agree, is growing, and rapidly. This growth is driven, in part, by the rising tablet market. Smart home DIYers have increasingly found the tablet as an effective remote control to manage all of the systems commonly found in a smart home. Additional drivers include the decreasing costs of smart technologies; increased government regulation regarding energy consumption; increased energy costs; increased consumer awareness of, and concern about, the environment; and consumer security concerns,” a Cleverism report noted.

Read more from our Tech issue