Housing and the economy: Agents approach 2019 with a fresh perspective 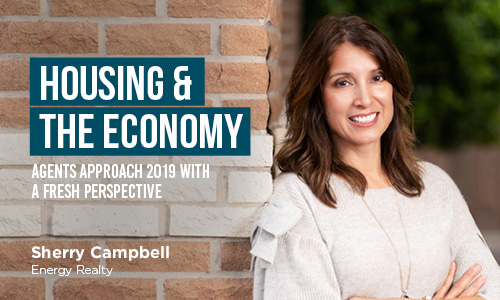 Though it may feel removed from the day-to-day pressures of running a real estate business, you can’t ignore the economy. Real estate is cyclical, and it’s dependent on a variety of economic factors. An agent can be an ace salesperson, but that won’t change the fact that the job market, wages, interest rates and inventory all come into play for consumers who are considering buying a home.

Lately the economy hasn’t been all that fun to watch. Wild stock market fluctuations in the final weeks of 2018, uncertainty over the impact of economic tariffs and a predicted drop in the gross domestic product are all a bit stomach-turning.

However, while the economy is expected to slow in 2019, a drop into a recession is not in most forecasts that were released in December. Goldman Sachs anticipates that the rate of economic growth will drop from 2.9 percent to 2.5 percent. The Congressional Budget Office expects growth in gross domestic product to be 2.4 percent throughout 2019, down from the 3.5 percent rate seen in the third quarter of 2018.

James Gaines, chief economist at the Real Estate Center at Texas A&M University, does not expect a slower national economy to translate into a full-blown recession.

“Nobody’s anticipating a national recession,” Gaines says. “Even if the global economy slows down a little bit, the US economy will probably be a little bit slower in 2019 that it was in 2018 but it will still be a positive economy, it’ll still be relatively forward moving and shouldn’t be a problem.”

Wendy Cline of Wendy Cline Properties expects factors like the oil market and rising interest rates to bring about a slight dip in the housing market in the first quarter of 2019.

“This year at the close of 2018 we’ve seen that market do what I call a mini shift,” Cline says. “That means there is about six months of inventory that we’re seeing right now. It’s been a seller’s market. We’re seeing it shift back to more of a balanced or a buyer’s market where inventory is getting a little bit high so it needs to balance out with supply and demand.”

Houston boasts a diversified economy, but the importance of oil and the energy sector cannot be ignored. Oil prices dropped dramatically through December, with West Texas Intermediate crude oil plunging from above $76 per barrel in October to closing out the year slightly under $46 per barrel, according to Oilprice.com. Gaines says that Texas and Houston in particular should do “reasonably well” if oil prices hover in the range of $45 to $55 per barrel.

The picture would be rosier if that number were boosted a bit, according to Cline. “If we can hit that $60 to $80 a barrel range again, then we won’t have the regression that we’re looking at,” Cline says. “But if the oil continues to go down, then that has a direct effect on buyers on the fence. The oil market is a huge factor for the economy, as are interest rates.”

“If the energy market doesn’t move too much, if it is less volatile than what it might possibly be, then the Houston economy is going to do just fine,” Gaines says. “We’ll add jobs several tens of thousands of jobs, probably not the hundred thousand jobs we’ve done in years past when we were booming, but 50,000 or 60,000 jobs is probably achievable subject to not having any kind of big downturn on the price of oil depressing things. That’s the key variable.”

Sherry Campbell of Energy Realty has seen the recent downturn in oil prices affect her business in Houston’s Energy Corridor. “I think that we’re seeing oil companies are being much more cautious in hiring and taking on bigger expenses,” Campbell says. “But we start to see movement first in rentals. We started to see rentals pick up in the higher end rental market, which often involves oil companies leasing properties. As they start to hire, they’re not going to make long term commitments. They’re going to bring employees in and offer them a rental package so that if they have to turn around and move them back, they’re able to do it quickly.”

Cline believes Houston’s other economic engines such as the Port of Houston and the medical and research sectors can do their part to help sustain the city, but a prolonged downturn in the price of oil can affect everything from retail to restaurants.

Nationally, rates on a 30-year, fixed-interest mortgage stand at about 4.55 percent at the end of 2018, according to Freddie Mac. WalletHub shows a range of rates between 4.125 percent and 4.75 percent in the Houston market.

While the prospects of purchasing another home at a rate of around 4.5 percent can be daunting to homebuyers who last bought at 3 percent or so, the rate shock effect is not nearly as bad as it’s been in the past.

“I think that our buyers have become spoiled, because at 3 percent they can afford a lot more house,” Campbell says. “At 4 percent or 5 percent their affordability rate drops. They’re going to have to get used to that. Maybe they can’t qualify for the $500,000 house and have to buy the $400,000 house because payments are higher. We have to see some adjustments with that, because I think it’s kept some buyers away his year since they’re not able to get what they were expecting to buy.”

Cline suspects that a higher cost of borrowing may cause some buyers to put off making a purchase.

“It will give some of the buyers who are on the fence a reason to stay on the fence and not go ahead and consummate a purchase,” Cline says of the higher cost of borrowing. “We’re also seeing that the higher priced properties like $700,000 and up stand to see some extended shelf life and days on market.”

Gaines also sees the increase in interest rates, which the Federal Reserve raised from 2.25 percent to 2.5 percent on Dec. 19, as a factor that will slow the housing market—but not so significantly as to throw the market into a major slump. Gaines says that economists now expect the Fed to raise rates twice in 2019, instead of four times, as had been forecast.

In the Houston region, growth in the housing market will continue, though it is expected to slow. Realtor.com predicts that sales will increase modestly by 0.4 percent and prices will also rise by about 3.1 percent.

Inventory remains tight across the nation, though modest increases are expected in 2019. In its 2019 National Housing Forecast released in late November, Realtor.com forecasted that prices will grow at a 2.2 percent rate and inventory will increase at a rate below 7 percent. Nationally, most of that growth is expected to take place at the upper end of the market. The Houston Association of Realtors reported in December that inventory in the Houston region edged up to 3.9 months’ supply in November, from 3.6 months’ supply in October.

Campbell has seen the market for luxury homes priced at $500,000 and higher affected by the drop in oil prices, but the city’s housing market remains strong.

“I think day-to-day, when sales in Houston are reported as up, and they’re saying, ‘numbers are up,’ that’s in a very specific sector,” Campbell says. “And part of that has to do with new construction in the farther out suburbs in a price range that your average buyer can afford, which is probably under $300,000 or $350,000.”

Gaines sees the inventory situation as slowing Houston’s market, bringing it down to earth from the record numbers seen in recent years. “We have three and a half to four and a half months of inventory instead of six or seven months, which might be more normal,” he says. “We are expecting the transaction volume and pace of transactions in the Houston market to be slower than it’s been the last several years or last couple years, at least. It probably will still be another record year. There will probably still be more homes bought and sold in 2019 than there were in 2018, but the step up in number won’t be as big as step.”

Making the dream work: How teams fit into brokerages

How managing brokers foster a culture to recruit and retain

Cover story: How to thrive in an evolving luxury market