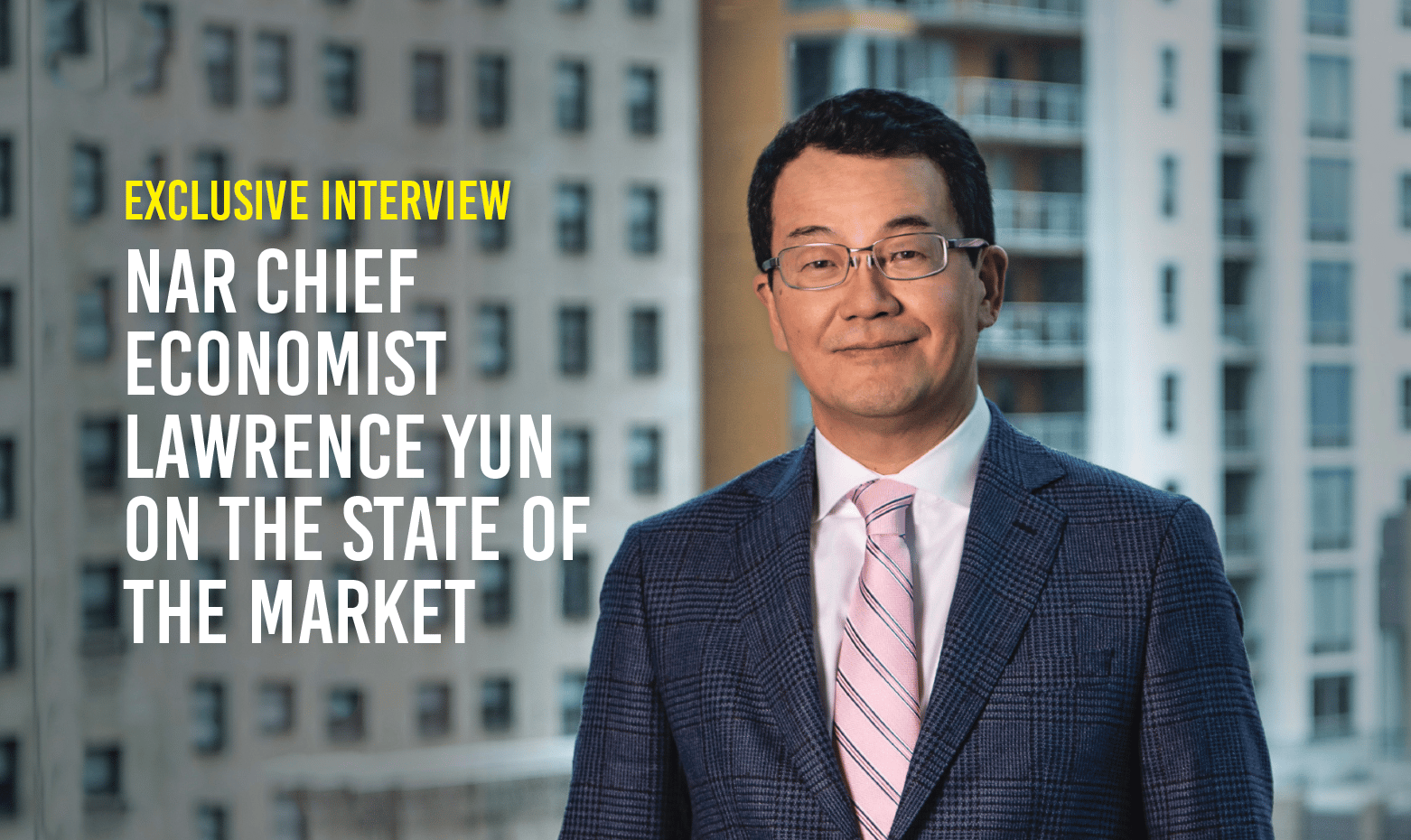 The National Association of Realtors released its projections for 2023 in mid-December, forecasting a market that continues to find it’s pre-pandemic equilibrium.

This return to a sort of normalcy is just the boring kind of year that the market and the industry desperately needs, and it’s likely to bring more buyers back to the table, according to NAR Chief Economist Lawrence Yun.

Following the report’s release, we spoke with Yun in an exclusive interview to take a closer look at NAR’s thoughts on the state of the market and what lies ahead.

NAR said in its 2023 forecast that prices will stabilize, but that comes with the caveat that some markets will see increases, while others will decline. All real estate is local, Yun reminded.

Mortgage rates rose so quickly, as a result of the 2021 real estate boom, that many, particularly first-time homebuyers, were priced out of the market, but Yun reminded that there is no shortage of jobs across the country, and that bodes well for the future of home sales. “On net, we are adding jobs, which provides some support for housing demand,” he said.

Yun believes that mortgage rates peaked in late October, when they grew to more than 7%, noting that they’ve already dropped back down to about 6.5%. That figure is expected to slide further to around 6% early this year, Yun said. The drop is a signal that the Federal Reserve is likely to be less aggressive on interest rates because of calming inflation, according to Yun. “I think that will bring some buyers back into the market, and job creation also provides the support,” he added, noting that the rate drop will start to bring buyers back this spring.

Don’t expect any big movement before then, though. Supply shortages and fewer sellers mean that meaningful price declines are unlikely in most markets, Yun predicted. But outlier markets, particularly expensive markets like San Francisco, could see significant price declines of 10-15%, he added.

Prices in hot mid-sized markets like Austin, Salt Lake City and Nashville will be harder to predict, according to Yun, who believes they may experience a short-lived retreat in prices before turning upward again because of their strong job markets. “The California market is somewhat different because they have slower job creation, while at the same time, expensive market conditions,” he said.

While San Francisco and other West Coast cities may take a hit on prices, as the real estate market settles, others are likely to remain hot, according to Yun. Southern cities like Atlanta — identified by NAR as the top real estate market to watch this year — Greenville, South Carolina; and the region around Fayetteville, Arkansas, for instance, will outperform other metro areas. Those areas and others like them are experience strong job growth, which will keep the real estate market thriving, he said.

Yun also believes that while the exurbs were hot markets during the pandemic, what lies beyond those markets could begin to gain more value as more companies allow more employees to work from home permanently. “So maybe the exurb market had its heyday already, but the rural community is still very affordable. So people who have the full flexibility, they may consider some of the rural region as a place to have a mansion at an affordable price,” Yun said.

The livability of cities, however, will continue to attract the millennial generation, he predicts. “Even if the work environment is such that you can work from home, I think they still like the downtown and walkability and the vibrancy,” he said, noting that millennials could help revive the downtown condo market going forward.

As mortgage rates start to inch down, those millennials with upward mobility could make the leap to homeownership, according to Yun. “Some of those high-income renters may say, ‘Look, I like downtown. Now I want to convert from renting to owning,’” Yun said. NAR predicts a 5% increase in rent prices this year. Combined with the 7% increase renters experienced in 2022, the rising prices could also help urge them toward homeownership.

When will inventory return?

The long-term housing deficit is unlikely to change any time in the near future, but falling mortgage rates could help get the market for new homes back on track in the short-term, according to Yun. Builders are increasingly cautious these days because of buyers canceling their contracts as the home is being built.

In some cases, buyers were looking at 3.5% mortgage rates, but by the time they had to get the loan, those rates were much higher, Yun said. “The increase in cancellations means builders have got to be more prudent and cut back on some of the production, but that’s a short-term situation.”

As for the long-term structural housing shortage, Yun urges local, state and federal governments to step in and help stimulate the market. “There’s not enough new-home construction in relation to the population growth in the country, and, therefore, we have to really crank out more supply because we had an inventory shortage right before COVID,” he said.

Builders have a natural profit incentive to build more, Yun explained, and anything that hinders their production, such as excessive regulation, is exacerbating the housing shortage problem. He believes adaptive reuse of buildings could also be part of the solution. “The other part is, why not incentivize through a tax credit or possibly even actual direct funding, especially on some of the disused buildings. It could be, say, an office building that remains empty. Could it be converted into condominiums? What about a shopping mall?”

He added that large cities, such as Chicago, could help ease the housing shortage by rehabbing vacant properties. That all requires a commitment from local lawmakers through the form of tax credits or other funding vehicles.

Light at the end of the tunnel?

Yun reminded that while the beginning of 2023 will remain challenging for brokers, real estate is one of the more cyclical sectors of the economy, and the latest swing will eventually rebound. “There are ups and downs — we went through some downturn in the second half of 2022, and the the first quarter, even the first half, of next year could be still challenging for people in the business, but I think one will begin to see some upturn towards the second half of next year, and definitely by 2024,” he said. “The mortgage rate is the lifeblood, and it looks like the mortgage rate is trending downward, which is a very good sign.”