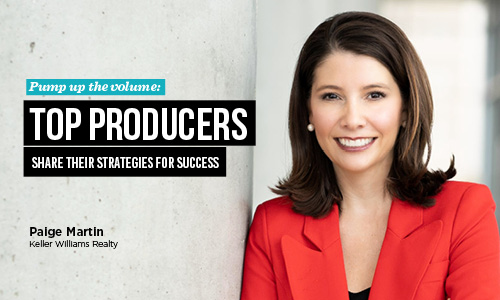 Becoming a top producer takes hard work, around the clock dedication, persistence and knowledge that can only come from experience. Many top producers earned the title early in their careers and, decades later, continue to reach the highest levels of production in the industry, leaving everyone else to wonder: How do they do it? Houston Agent magazine spoke with long-time top producers Mike Seder, Paige Martin and Beth Ferester about their strategies for staying at the top and advice for aspiring top producers who are new to the industry.

Start at the beginning

Working in new homes sales for a decade helped Mike Seder of The Mike Seder Group—RE/MAX The Woodlands and Spring build a database of clients, providing a nice springboard for his career as a licensed real estate professional with RE/MAX, a company he has been with for about 30 years. New home sales also gave him a thorough understanding of how a house is put together—knowledge he uses to educate clients who are looking at resale properties. Since it worked out so well for him, he recommends newcomers follow the same path of entry into the industry as he did.

“Too many people get into real estate and fail because they don’t have the resources they should have before going into the business,” he said. But a foundation to build from isn’t enough by itself. Seder also emphasized the importance of continual learning and sharpening one’s toolkit. Another way he brings value to clients is keeping up-to-date on trends in home design by reading as much as he can about it, which gives him the ability to advise homebuyers on current colors, layouts, new technologies and everything else that can help make a house a home.

Provide a high level of service

A Top Producer since he first joined RE/MAX, Seder’s passion for the business makes going to work seven days a week not feel like a job at all. “You’ve got to love it,” he said. “If you don’t, you’re not going to be productive.” Last year was Seder’s best year ever, despite properties staying on the market longer and fewer showings. Loving the work couldn’t have hurt, but it wasn’t enough by itself. Overcoming a tough market required Seder to make a substantial investment in marketing and do a lot of hand-holding with clients, keeping them constantly updated on where they were in the process and why it was taking long to complete. Being backed by a highly qualified, service-oriented team who live the brand Seder has worked hard to establish for himself was also key, he said.

Regardless of whether a client’s home is valued at $150,000 or $4 million, Seder said he strives to provide everyone with the same level of service. After all, it’s the relationships he’s cultivated with clients over the years and the comfort they feel working with him, that drive his business. He says its important to pay careful attention to them and modify his approach accordingly. If they are moving slow, he moves slow. If they are in a bigger hurry to close fast, he picks up the pace. And the little things can be big. Each time Seder steps into a client’s home, he takes off his shoes. “People say to me, ‘You showed such respect to our home.’ I get listings by taking off my shoes.”

A mistake Seder has seen many agents make is spending a lot of money on marketing when the market is hot but then holding back when it’s soft, when he says they should be doing the opposite. In good times, he suggests planning ahead by scaling back on marketing in order to set aside funds for promoting properties during a downturn.

While it’s nice to be on top, Seder said a drawback of being a top producer is clients tend to bring him the properties that are hardest to sell, assuming he can sell them easily. It’s not always so. But even with some sales that take a long time to get to the closing table, losing the top producer title is not a concern of Seder’s. “I don’t look at my numbers, where I was last year, where I am this year,” he said. “I always look at my business as: ‘What can I do to get better?’”

Adopt the habits of top producers

Undeterred when she sold just one house her first year in the business, Paige Martin of Keller Williams Memorial invested early in her education, took on the habits of top producers—work hard, listen, go the extra mile when other agents won’t—and success followed.

For Martin, that extra mile has many components. She works7 days a week. She personally tours homes to deeply understand floor plans, finishes, renovations and landscaping. She calls 50-plus prospects and visits at least seven clients each week. She analyzes market trends where she sells. She studys home sales in Houston for the past 20 years to track the market through more than just the current cycle. She even attends contract classes.

A broker for 16 years, Martin has been a top producer for the past decade. Rather than worry about losing the top producer title, she focuses on improving her strategies every day. “The bar is higher,” she said of top producer status. “I need to consistently get better every day, to provide more value to the clients and team members we have.”

Although Martin believes most top producers share similar traits—hard work, dedication, empathy and grit—what she says one thing that sets her apart from her competition is a willingness to turn down more business than most brokers. She learned pretty quickly that life is too short to work with people who disrespect you and your team or expect you to be a ‘yes-man’ rather than an advisor.

Give clients something to remember you by

At a recent meeting, Beth Ferester asked agents to come up with one word that would embody their efforts throughout the year. They chose words like focus, persistence and consistency. Fair enough. But Ferester got right to the point.

A top producer for nearly all of her 37 years in the industry and owner of Beth Ferester & Company Realtors in The Woodlands, Ferester was motivated

from the beginning to be among the best at what she does. She walked Houston’s neighborhoods early in her career to know them intimately, and connected with prospects by passing out a cookbook containing recipes from friends, family and clients. It was a way of engaging with prospects before the Internet, she said, noting she handed out cookbooks each year for 14 years and it paid dividends—even many years down the line. At one point, a former client she hadn’t spoken to in more than two decades found the cookbook and called her because she’s ready to move again.

“You’ve got to keep engaging people personally,” she said. “Give them something they will keep over the years.”

Ferester has a long history in the area. She’s on her second time owning a business. She founded Ferester & Company in 1991 and at one time had 55 agents on board. She sold the business to Coldwell Banker in 1998 and went back to strictly working as an agent. By 2017, she wanted to do her own thing and not have to wait for higher-ups to give her the go-ahead on big decisions. She started another business, Beth Ferester & Company Realtors, and took five agents with her, including her husband Bob.. By 2018, she had 18 agents on board. “We believe small, hands-on service is absolutely the way to go.”

For Ferester, it can be a problem that people assume she is too busy to work with them or that she only deals with high-end properties; neither of which are true. “Our motto is ‘quality for every lifestyle,’” she said. Luckily for her, her career has advanced to the point where she can pick and choose what she wants to do and delegate the rest.

These days, Ferester acknowledges that she doesn’t have to “go out and beat the bushes” like she did early in her career. Most helpful is the support system she has in other agents, whom she refers to as her best clients. “If you lose the respect of other agents, you are done,” she said. “It’s the most important thing you have.”