How managing brokers foster a culture to recruit and retain 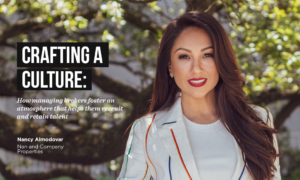 The skills of a managing broker can create a stellar workplace or one that makes agents run for the exits. There needs to be a vision for the team and a plan to ensure success and longevity. We talked with three managing brokers who used innovation, education, and excitement to retain and recruit their best.

Nancy Almodovar, President and CEO of Nan and Company Properties, recalls that when she was an agent, “I felt alone in the industry.”

Almodovar vowed to become a broker who created a feeling of family. From her kitchen table, Nan and Company Properties was born five years ago. “I wanted a firm where people wanted to come to work and be happy and by being happy and having the right systems, we have proof that anyone can be a top producer,” she said.

For her, the key to retaining top agents is making them feel at home, even when they’re at work.

One of her agents started out only doing apartment leasings and now is selling million dollar homes, says Almodovar, whose firm has offices in the Galleria and soon in The Heights.

Almodovar started with two agents and now there are 50 associates mirroring the diversity of Houston in a firm consistently named one of the best places to work in the city. “We have [agents] as young as 22 up to 60 and we represent our city. We speak more than 14 different languages and we are all different colors, shapes, and sizes,” says Almodovar. They work, learn and play together.

On a recent Monday, nearly half the agency’s associates came together for a workout at the city’s trendiest new exercise venue, Barry’s Bootcamp in River Oaks.

On another occasion, they brought in celebrity reality show personality Josh Altman of Million Dollar Listing for a training session. “That’s what you are exposed to at Nan and Company. We are very different,” says Almodovar. That’s probably why the firm gets about 10 calls a week from people wanting to join her team, according to Almodovar. But her associates have to be willing to set aside their egos and learn. It’s the only way the delicate balance of a positive office culture can function and sustain itself.

Learning is also key for Michael Bossart, Managing Broker and CEO of Keller Williams Memorial. The franchise had 119 employees when it started and now has 710 associates, making its the area’s largest full-service agency, he says. “It’s about hiring great staff to manage those agents. We do a lot of time researching great hires,” says Bossart.

Because real estate is “an ever-changing industry,” Bossart wants his people to have every advantage. So every day no less than 75 key classes are available, he says. Classes are voluntarily taught by the top agents.

There is a particular kind of agent attracted to Keller Williams.

“You focus on making sure agents know everything we have to offer. The successful ones are learning-based, they are not stagnant and they are extremely professional,” says Bossart.

“The reality is that 50 percent of agents are just happy to have a license and don’t care to learn and they will be replaced,” said the man who four years ago was voted Broker of the Year by readers of Houston Agent Magazine.

In one of the classes offered by Keller Williams Memorial, agents learn the DISC theory, which explains personality types and in doing so gives participants an advantage in interacting with all clients, from the dominant and outgoing to the steady and cautious. The first two traits are often found in real estate professionals, while the latter are often found in those who can afford to buy houses, Bossart noted.

The franchise offers toastmasters and coaching for dual careers since many agents are working another job. It also provides sessions on breaking into the multi-million dollar market. “We want to plant that seed,” says Bossart.

In addition, Bossart builds trust and buy-in by choosing 18 associates from among its top 20 percent and naming them to a committee to help run the company. There is also provide profit-sharing. “We have one agent who made $90,000 in profit shares. When she retires, that goes with her. Last year we paid out $650,000 to an agent. This is why Keller Williams offices got to number one. I take their advice and all the agents get to see every piece of finance, including my salary,” said Bossart.

Besides transparency and feeding their brains, Keller Williams Memorial makes sure no one is left behind.

“We have two or three people with cancer right now. Our company helps fund their treatment. Another agent has epilepsy and fell. Our office raised a little money and we are buying a dog who will recognize when she is having symptoms,” Bossart said. The generosity is not just internal. After Hurricane Harvey hit the Houston area hard, the company gave $1.1 million for Harvey relief.

“When Harvey happened, we took out a 100,000 square foot warehouse and people donated all kinds of supplies so others could go ‘shopping’ getting the supplies they need. We had 5,000 agents work in the warehouse for a month. This is what our community does: Find the light of hope in a bleak industry,” says Bossart. Having that spirit of a servant is an important and often unrecognized aspect of the real estate business that can attract repeat clients and valuable referrals.

Ask James Krueger of Krueger Real Estate, who started building his company in 2013 and at one point had 70 agents who he describes as “kind of mediocre. It was tough to manage.”

He conducted major surgery on his firm and whittled the fat from 70 to a dozen and now he is at 26 associates. During that rollercoaster ride, he learned to be slow to hire and quick to fire. He also determined that “culture is everything.”

“We had 70 agents and there were some bad agents who were like a cancer and that stuff spreads. There was a lot of negativity,” said Krueger.

He decided to develop core values and started hiring on those values.

“A prominent value is good vibes only. I looked at what is important to me and learned it can’t come from the top down, it has to be collaborative,” said Krueger.

So the team held meetings and week-long discussions with agents and staff. “’Be helpful’ became a core value,” Krueger said, speaking of what came out of that series of conversations.

That mindset showed itself recently on Father’s Day when Krueger learned from an agent that a client had a leak in the kitchen at a listing. The property was not far from Krueger’s home so he went to inspect.

“There is water dripping in the kitchen and I see both sinks filled with water and there is about an inch and a half of water warping the laminate flooring. The main drain for the air conditioning had clogged.”

Krueger called the owner of the property and then went to work. He grabbed a dry vac and towels and by the time the owner arrived, he’d emptied 18 gallons of water, traversing three flights of stairs. “I called up a couple of contractors I know but I had to turn off the AC and I was there for a couple of hours. The seller was so enthusiastic about what I had done, I said I would hope you do the same thing for me. Doing the right thing is a matter of integrity,” says Krueger.

The homeowner had major praise for Krueger’s firm, which was worth more than any delayed holiday or the sweat equity Krueger invested. It also made an impression on his agents. Another core value touted by Krueger is “accountability equals success.”

To keep agents happy, the firm gives new agents leads in their first week through the CRM it uses. But one way to keep getting leads after that is to attend educational meetings.

All brokers look at retention and Krueger recalls when a top agent left last year and then the same company went after that top agent’s best friend, who also worked with Krueger.

“The agents know I care and invest in their growth but there was a breakdown in communication and he didn’t know to talk to me and I didn’t talk to him. The best friend, who was heavily recruited, opted to stay because of the culture and the one who left returned after six months,” says Krueger. Lesson learned. Communication is key.

What makes Krueger Realty unique, he says, is that “I am zigging where others zag. That makes me happy that I’m ahead of the curve.”