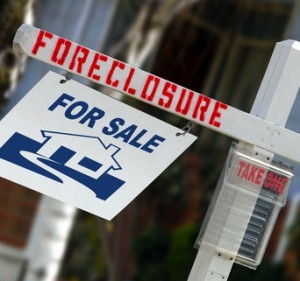 Sales of homes in some state of foreclosure made up nearly a quarter of all home sales in 2011's fourth quarter.

Homes in some state of foreclosure accounted for 24 percent of all U.S. residential sales during the fourth quarter of 2011, up from 20 percent in quarter three but down from 26 percent in 2010’s fourth quarter, according to the latest data from RealtyTrac.

Altogether, 204,080 residential properties that were either in pre-foreclosure or REO status were purchased in the quarter at an average sales price of $164,944. That total is down 8 percent from 2011’s third quarter and down 2 percent from 2010’s fourth quarter. For all of 2011, foreclosures were 23 percent of all sales.

Brandon Moore, the chief executive officer of RealtyTrac, said that though foreclosure sales are being slowed by extraneous details, they were still a large component of overall sales activity that will only increase in 2012.

“Sales of foreclosures in the fourth quarter continued to be slowed by questions surrounding proper foreclosure paperwork and procedures,” Moore said. “Even so, foreclosures accounted for nearly one in every four sales during the quarter and for the entire year. We expect to see foreclosure-related sales increase in 2012, particularly pre-foreclosure sales, as lenders start to more aggressively dispose of distressed assets held up by the mortgage servicing gridlock over the past 18 months.”

In terms of regional REO sales, the Midwest experienced the biggest regional discounts regarding sales price. In Chicago, 18.73 percent of home sales in the fourth quarter were REO, and at an average sale price of $118,278, they were sold at a 49.71 percent discount. However, as the fourth highest discounted area, Chicago trailed such locations as Philadelphia, where REO homes sold at a 52.51 percent discount, and Milwaukee, the highest discounted area, where homes sold for an incredible 57.90 percent discount. Minneapolis, Cincinnati and Des Moines were also mentioned for having highly-discounted REO sales.

“We continued to see a shift toward pre-foreclosure sales, or short sales, and away from REO sales in the fourth quarter,” Moore said. “Nationally, pre-foreclosure sales increased 15 percent from a year ago while REO sales decreased 12 percent … That trend will likely show up in more local markets in 2012 as lenders recognize short sales as a better option for many of their non-performing loans.”