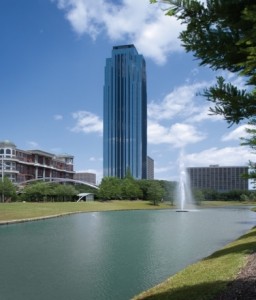 Williams Tower, Houston’s third-largest building, is one of the many office buildings that attract foreign investors.

Last year was the first time that Houston was among the top five global cities foreign buyers are buying in, according to an annual survey by the Association of Foreign Investors in Real Estate. Houston is luring a large range of buyers, from Toronto to Tel Aviv, seeking properties with lower costs and higher returns than buildings in the priciest U.S. cities.

Real Capital Analytics Inc. reported that firms outside the United States acquired $2.83 billion of Houston office buildings in the past three years, making them the largest net buyers of any investor class. They spent four times more than U.S. real estate investment trusts, which ranked second. It has also been reported that sales of Houston offices increased 32 percent to $3.89 billion in 2012, the highest in five years.

Realtor Jack Haymes of United Real Estate says this is present in Woodland Springs, the area where he works. He notices a large presence of the buyers are from Mexico, and says they are specifically attracted to Houston because of the convenience to their homeland and the value for a dollar.

“I love Chicago, I grew up there, but it’s a lot harder to afford a place there than it is in Houston,” Haymes said.

Real Capital data also reveals that last year, Houston deals had a 7.4 percent average capitalization rate, exceeding the 7.1 percent rate for all of the United States, and 5.1 percent for transactions in New York, the most expensive domestic market.

In an interview with Bloomberg, Greg Kraus, managing director at Atlanta-based Invesco Ltd., a global adviser for pension clients, spoke very highly of Houston: “Houston has gained broad acceptance as a top-tier market,” he said. “It’s reflected in job growth, more gas refineries, more oil out of the Houston port and a true international feeling.”

It appears as though foreign investors are favoring office buildings, as Real Capital data shows that they made up 45 percent of investment since 2007. Recently, global investment management firm Invesco purchased Williams Tower, Houston’s third-tallest building, for $412 million.

Past foreign investors include Toronto-based H&R REIT, which paid $442.5 million in 2011 for Hess Tower downtown; Munich-based Allianz SE, which spent $227 million for a 49 percent stake in four Galleria towers; and the Tel Aviv-based companies, Menorah Mivtachim Holdings Ltd. and Psago, which purchased One City Center for $131 million.

The Future of Houston’s Global Investors

Houston was ranked fifth in the foreign investors association survey, behind New York, London, San Francisco and Washington, D.C. But will it stay that way? There is really no way to know for sure, but based on how well it is working out for them right now, Haymes is very confident that foreign investors will remain an active part of Houston’s future.

“With the global realignment, more and more money will be coming into the United States,” Haymes said. “As long as it doesn’t get out of hand, I think it’s good for us.”