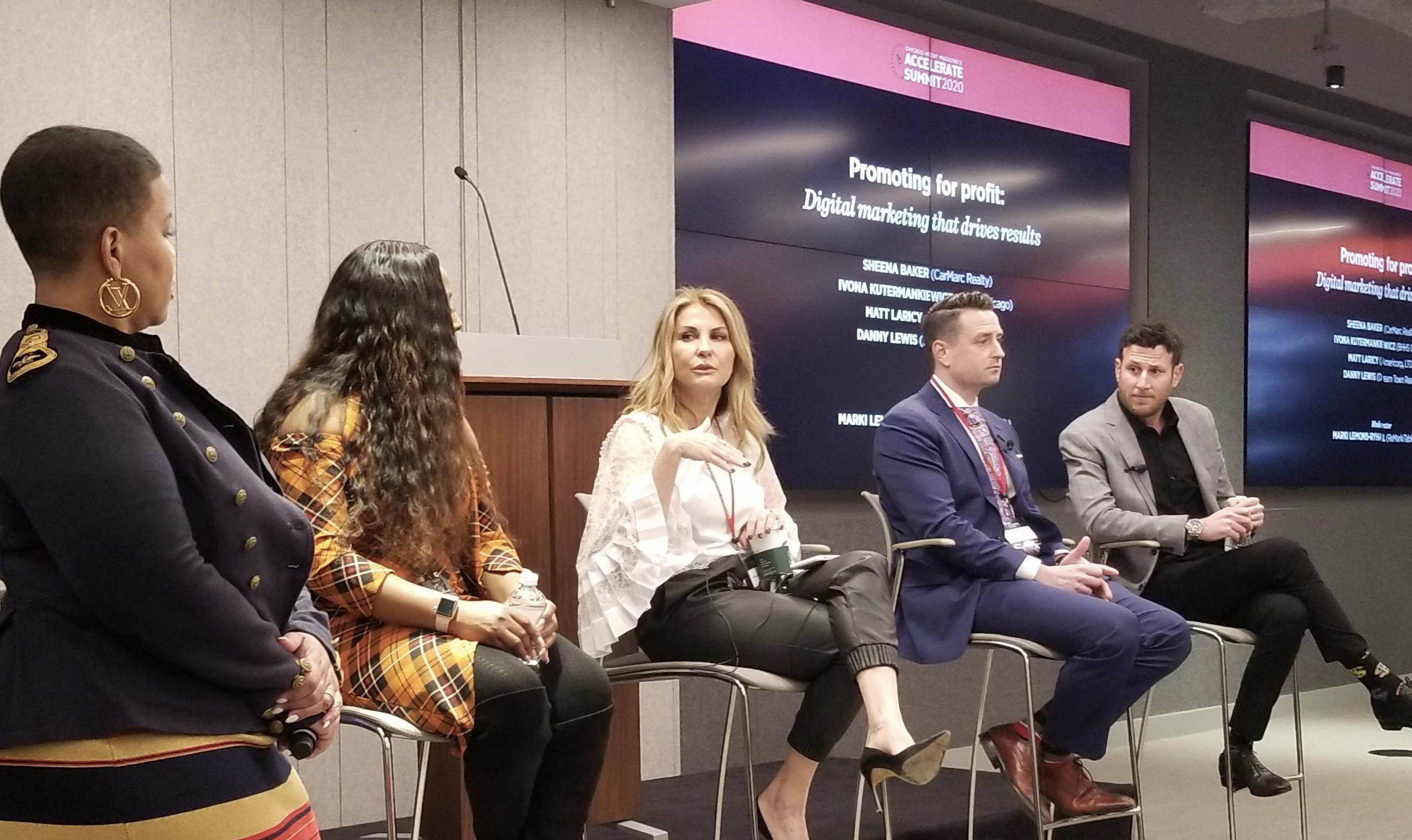 The world of digital marketing is a bit like the Wild West in real estate. New social media platforms surface, suddenly become a vital part of an agent’s online strategy, and then, often disappear just as quickly.

Beating the competition to new technological innovations was a recurring theme among panelists. Lewis said he invested heavily in the early days of Zillow, noting that the property site “got me to where I am in the first place.”

“When I first started in 2011, it was a pretty new platform, and not everyone knew a lot about it or to invest in it,” he said. But he did note that, as the website became increasingly popular, the advantage he had over other agents began to fade.

Laricy said digital marketing should be like a second business for agents. “In this day and age, you need to understand how the digital world is run and figure out which tools are working for you best, and you need somebody that specializes in digital to help you out with that,” he said.

Laricy told the panel that he also was an early adopter of Zillow, first utilizing the website in 2008. He said others in the industry “laughed at me” for using the now-ubiquitous real estate portal.

When it comes to early adoption, Laricy posed this question: “By the time a big thing takes off, are you going to be in the position to take advantage and reap the benefits, or are you the one spending a lot of money trying to catch up with the players that already won?”

Sometimes simple marketing efforts can pay big dividends, though, according to Kutermankiewicz, who said she’s had measurable success with Facebook ads. “I bought a $30 ad on one and got a $1.5 million sale,” she said. She added that she’s gotten a lot of referrals from clients and others who follow her on Instagram.

Baker similarly has had a lot of success connecting with clients on Facebook and Instagram. She said that although she’s usually too busy during the day to spend much time on the social platforms, she often spends her evenings responding to comments and liking posts. “Those are the things that make people remember you,” she said.

The importance of video in digital marketing also came up repeatedly during the panel with seemingly unanimous agreement that it’s becoming increasingly important.

Though taking the mantle of video star might not come as second nature to many in the industry, Lemons-Ryhal encouraged agents to step out of their comfort zone. “That means you have to get over how you think you look,” she said. “People do not care how you look. They want you to solve their buying and selling problems.”

The conversation gravitated toward TikTok, a mobile app that allows users to make short videos, often underscored with music. TikTok has been on the market for only a couple of years but already boasts some 500 million active users worldwide.

Laricy called TikTok the most popular social media platform available, adding that his company is trying to figure out how to use it. “If somebody figures out TikTok, they’re going to be first in the market, and they’re going to win a bunch of business,” he said.

The panel also emphasized the importance of the bigger picture: simply having a reasonably robust online presence. Laricy said he often can’t find any information about agents online. Lewis encouraged real estate professionals to look themselves up on Zillow and see how many reviews they have. Too few reviews could hurt an agent’s reputation, he said, likening it to the plight of many a small eatery on Yelp. “If I pick a restaurant on Yelp, am I going to pick the one with five reviews or 300 reviews?” he asked.

Having a presence is just part of the picture, though. Kutermankiewicz said her main focus is on branding. “First I decided who I wanted to appeal to — who my customer base is,” she said.

Lemons-Ryhal agreed, noting that her client base is primarily on the South Side of Chicago. “That means I’m going to talk to them about things that appeal to that market,” she said. “That would be something totally different than what Ivona would talk about with the luxury market.”