Phoenix Commotion was founded 12 years ago, with a goal of proving that attractive, affordable homes are possible. So far, the company is inching toward this goal. 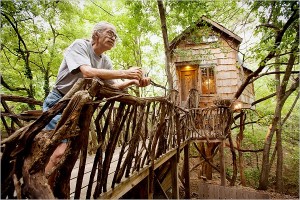 Dan Phillips is the founder of Phoenix Commotion. His hometown is Huntsville, Texas, but the 14 local homes with his name on them are not full of his childhood memories, but rather occupied by low-income buyers, and made out of any sustainable materials that the self-taught carpenter, electrician and plumber could get his hands on.

The company of five minimum-wage construction workers recruits to-be homeowners in the construction process, as well as consulting professional engineers, electricians and plumbers to ensure the homes meet local building codes, according to The New York Times. .

“You can’t defy the laws of physics or building codes,” he told The New York Times, “but beyond that, the possibilities are endless.”

While the efforts of the company have been well received, some of the low-income homeowners have been pushed to foreclosure, unable to afford payments of $99-$300 a month, leading them to abandon the homes which are then scooped up by intrigued middle-class buyers.

Now, what started as a dream for Phillips has resulted in an established building materials warehouse, a handful of grateful low-income homeowners, and several unique homes.