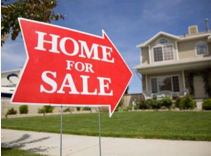 New home sales were down a bit in February, but positive signs still abound for housing.

For the second month in a row, new home sales were down monthly but up yearly, increasing 11.4 percent from February 2011 but decreasing 1.6 percent from January 2012’s revised rate of 318,000, according to data just released today by the U.S. Census Bureau and the Department of Housing and Urban Development.

In addition, the Census Bureau reported the median sale price for new homes in February was $233,700, while the average sale price was $267,700. New-home inventory was 150,000, a supply of 5.8 months, or 0.2 months below the equilibrium that the National Association of Realtors and analysts use to judge the health of inventories.

Though the report was less than what analysts had expected (as the Wall Street Journal reported, a Dow Jones Newswire survey had projected new home sales to increase by 1.2 percent from January to February), and January’s downwardly revised sales of 318,000 were a 5.4 percent decline from December, there were positive elements to the Bureau’s report, most notably the stabilization in new home prices.

As the Journal noted, the aforementioned median sale price of $233,700 was a 6.2 percent increase from February 2011, and for a market that has seen prices fall in excess of 30 percent in the last five years, that is definitely an optimistic development.

Also, as we reported just three days ago, building permits were up by 5.1 percent from January to February, the strongest sign yet of renewed builder interest in single-family properties. So though sales may have dropped somewhat, a new supply of homes, complete with new features and incentives, are on their way to attract buyers.