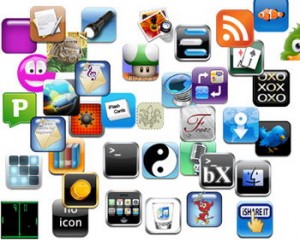 There are quite a few of apps out there that are nothing short of idiotic; but in a perfect world of sunshine and buttercups, here are the real estate apps we'd love to see.

Let’s be frank – there are some really stupid apps out there.

After all, when Apple coined the now iconic phrase “There’s an app for that,” they probably didn’t have Airport Sounds in mind, an app that plays…airport sounds. Or Waterslide Extreme, which simulates a waterslide ride. Or Screen Cleaner, which involves a pack of dogs “licking” your screen. Or Stare Contest, which allows you to practice for that staring contest gold medal at the 2016 games in Rio. Or iFart, which…well…you know.

With all the inanity out there on the app market, though, what’s stopping us from imagining potential apps that could make an agent’s life that much easier? Here are the four real estate apps we wish existed:

There are all kinds of apps that generate words and phrases, so wouldn’t it be exquisite if there was app for generating leads? Just think about it – you’re in a suburb or neighborhood of Chicago, you activate the Auto Lead Generator, give the phone a shake, and five or six names pop up that may be interested in your property. That would be great!

This one would be wonderful – an app that automatically vacuums carpets, cleans stovetops, wipes off counters and kitchen cabinets…ah, how glorious. The most aggravating component of home showings eliminated!

We recently devoted an entire issue to the art of negotiation, so we know as well as anyone how drawn out the process of counteroffering can be. So talk about an epic case of winning – an app that, with a push of a button, automatically regulates negotiations and ensures that each party gets what it wants.

Now your turn – in a perfect world filled with unicorns and rainbows of skittles, what real estate apps would you use?