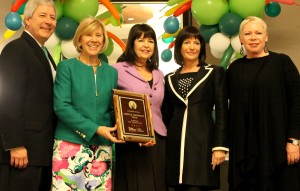 Gary Greene awards the Cherylé Sanderson Team, in addition to many others, for their dedication and hard work to the company.

The Better Homes and Gardens Real Estate Gary Greene awards breakfast was held on March 11, where over 300 real estate agents from the company’s 20 offices attended. Gary Greene partners, Marilyn Eiland and Mark Woodroof, announced at the annual event that the sales for the 2012 year approached $2 billion in total sales written.

Sherry Chris, the company’s president and CEO, congratulated the group for their efforts in achieving a successful 2012. She spoke about the importance of being a trusted advisor for the new generation of home buyers and emphasized the need to creatively use innovative real estate technology to guide today’s consumers on their home buying journey: “You have to think like them and become as savvy as they are in the use of the technological tools they respond to, including social media,” she said.

Woodroof noted that the company experienced major changes during the year, and Eiland thanked the agents for trusting them. “It is your dedication to helping today’s consumer and your commitment to this industry that helped us achieve our extraordinary success this past year,” she said.

The Top Office Award went to the Champions office manager, Sharon Teusink. The office was tops in their market with 757 listings taken and 1334 written sales. Earl Trammell, also with the company’s Champions office, won the Rookie of the Year Award for over $6 million in listings and over $2.5 million in business during his first year in the industry.

The Top Office Goal Achievement Award, given in recognition of outstanding achievement resulting in substantial growth exceeding the goals for the year, went to Bay Area office, managed by Debra Blenderman.

Dr. Oscar Gonzales, who joined the company in November as head of the International Division, was recognized for his marketing expertise and as one of the nation’s top-thought leaders in the housing industry. And Diane Mireles, a long-time top producer in the Friendswood office, was recently appointed as a manager of the Pearland office.

“We congratulate everyone for an outstanding 2012,” Woodroof said, “and we look forward to even bigger and better things in 2013.”