Most popular cities and states for millennials

As millennials comprise more and more of the housing market, some are relocating in search of better jobs, quality of life, and housing costs. SmartAsset took a look at where millennials are moving to find these things with Census Bureau data from 173 cities.

Times are changing and so are the cities of choice for members of the younger generation. Just three of the cities that ranked top 10 last year for the places where millennials are moving made the list again this year: Seattle, Washington, Columbia, South Carolina and Portland, Oregon. Overall, the states they’re moving to remained similar to last year’s findings, save for Tennessee and New Hampshire overtaking Virginia and Florida in popularity.

Millennials appear to have more interest in moving to the Western and Southern regions of the country — Dallas, Seattle, and Portland had the highest net increases of millennial residents to their population in 2019. Dallas ranked first with a non-net increase of 43,159 millennial migrants, then came Seattle with 33,989, and Portland was third with 25,405. In 2018, Seattle was the most popular city for younger residents with a net migration of 7,302 millennials. Columbia followed with 6,937, and Sacramento ranked third with 6,680.

Younger residents are probably drawn to these locals for their culture, job opportunities in the tech field or more favorable tax laws. Members of the millennial generation are likely being driven to move by life events like moving in with a partner, getting married or having children, chief economist Danielle Hale said in a press release on first time home buyers. 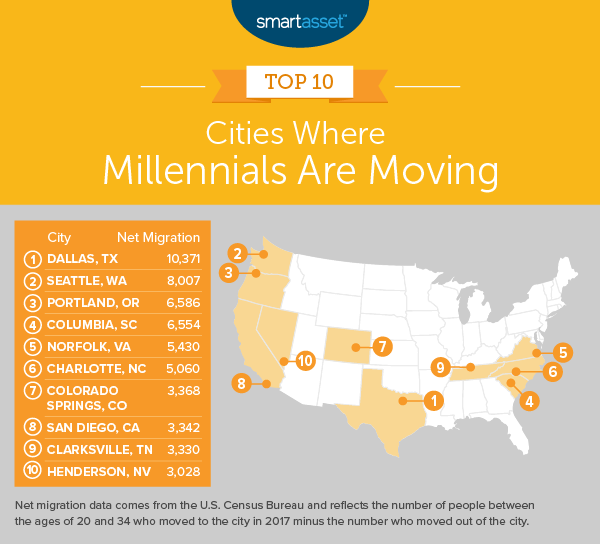