In 2010, the nation’s 10 largest mortgage lenders denied 26.8 percent of loan applications, up an additional 23.5 percent from the amount denied in 2009, said the Wall Street Journal. 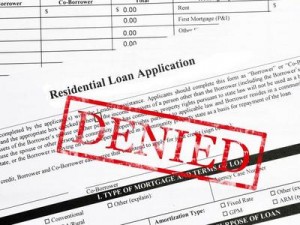 “As the noose on credit availability tightens, credit is being choked off at a time when the housing market is extremely fragile,” said Laurie Goodman, senior managing director at Amherst Securities Group LP, to the Wall Street Journal.

As the mortgage market struggles to manage their losses and deflate the housing bubble, many economists worry that they have pushed back too hard, in turn making loans very difficult to obtain in a time where loans are a necessity.

Some believe that the altered lending standards are entirely necessary, such as Beacon Economics housing economist Christopher Thornberg, who pointed out to the Wall Street Journal that in past decades, “credit standards were tougher than they are even now.”

Statistics prove this to be accurate; rejections rates were at 32.5 percent in 2007.

To many, though, this does not seem to be true, as the recession’s impact on the housing market causes trending toward renting-with one of the primary driving factors being difficulty obtaining a loan.

With an abundance of foreclosures, it is no secret that the mortgage market is being criticized for their lack of prevention, as Realtors call for reform.

Fannie Mae claims that tighter loan restrictions are necessary to compensate for “past excesses.” “Clearly we got too loose. This is a return to historical standards,” said Doug Duncan, Fannie’s chief economist in the article. “When markets were stable and these standards were applied, you didn’t hear the same complaints,” he added.

Complaints are likely persistent in areas such as Miami, where loan application denial rates are chart topping-at 44 percent in 2010. Detroit and New Orleans are also high up for loan denials.