A new law to be launched in 2012 is expected to take 100, 75, 60 and 40 watt incandescent bulbs out of manufacturing, hoping to promote energy efficient lightbulbs. According to Poynter, misconceptions of the law have led many to turn to hoarding, while others believed the to-be limited inventories are an impression on their general freedom of choice. 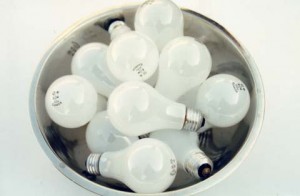 Poynter emphasizes that the law will not ban incandescent bulbs, despite the dwindling supplies of select wattages being removed over the next three years. However, fluorescent bulbs offer several benefits over their elder version such as lasting longer. Although the innovative bulbs come with a slightly steeper price tag initially, they are actually believed to reduce long-term energy costs in homes.

Additionally, the creation of new, high-efficiency incandescents offer consumers valuable options, dismantling the widespread belief that consumers will be forced to use fluorescent lighting. “At least three manufacturers have introduced new energy-efficient incandescents to replace the ones that are being phased out.,” said Poynter.

A prominent force in the light bulb industry, Higbee’s group supports the law, saying that the changes are “part of the electrical manufacturing industry’s broader efforts to reduce dependence on fossil fuels and achieve a cleaner environment.”

Backed by the Obama administration, but signed into law by President Bush in 2007, the law is now being heavily criticized as the effective manufacturing cutoffs approach. The topic has been met with criticism, contempt and brief glimpses of hopefulness by various government officials, as seen in a Washington Post article on the topic.

“The language that’s been used by the politicians finds its way into the coverage, because people don’t go back and actually look at what the law does,” said Ken Paulman of Midwest Energy News to Poynter.

Despite widespread repeal efforts, the law remains intact with the final vote in Congress falling short of the necessary amount needed to revoke the law.