July brings a modest increase in homebuilder confidence, with the National Association of Home Builders/Wells Fargo sentiment index increasing to 15 (from 13 in June), according to Bloomberg News. 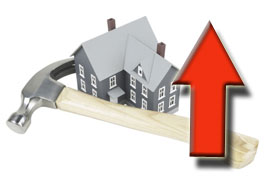 In April, we saw a 16, which was expected to continue, but instead June brought about a three-point drop to 13-a nine-month low for the index.

The South saw an even more optimistic measurement of 17.

The latest reading surpassed (average) economist expectations that the index would read a 14 this month, but the number still doesn’t show an especially bright outlook considering that readings below 50 “mean more respondents said conditions were poor.”

“In order to see a brighter future for housing, we need to see a stronger economy,” said Michelle Meyer, a senior economist at Bank of America Merrill Lynch in New York to Bloomberg News.

In addition to a slightly better sentiment index, it was recently reported that construction jobs were holding up better than those in many other sectors, according to data from NAHB.

“The builders group’s index of sales expectations for the next six months increased to a three-month high of 22 from 15. A gauge of current single-family home sales rose to 15 from 13. The index of buyer traffic held at 12,” said Bloomberg News.

While still not approaching the record low of 8 (January 2009), there continues to be room for plenty of improvement.

“While it is now well documented that the expected spring selling season of 2011 simply did not materialize, it is beginning to feel like the worst days of the housing market are getting behind us,” said Stuart Miller, chief executive officer of Lennar, on a June 23 conference call with Bloomberg. “Stabilization and recovery will continue to be a slow and rocky process.”