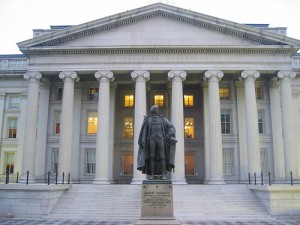 Back in January, the Treasury Department forcefully endorsed a potential principal reduction program from the FHFA, and the Wall Street Journal reports that the endorsement has placed newfound pressures on the agency’s director, Ed DeMarco, to act on the policy.

Though DeMarco has strongly resisted calls from analysts, lawmakers and other notable housing figures for a principal reduction program (and earned considerable ire from certain Congressman while at it), the Treasury’s recent offer to use leftover bailout funds to subsidize principal write-downs on Fannie Mae and Freddie Mac loans has some thinking the director may finally rethink his position.

Chris Gamaitoni, vice president with Washington-based Compass Point Research & Trading LLC, said in the Journal‘s article that the Treasury’s relationship with the FHFA lends it considerable authority in the debate.

“[The Treasury is] the game-changer,” Gamaitoni said. “[It’s endorsement of principal reductions] provides an economic scenario where [DeMarco is] not able to say no.”

And DeMarco did clarify in an interview this week that, “we said all along, if money came from another source, we’d have to reconsider our position.” According to the Journal, a decision from the agency is expected by mid-April.

The Treasury’s influence comes from the noted resources it has devoted – to the tune of $150 billion – propping up Fannie and Freddie, the two GSEs the FHFA directly oversees. So though DeMarco has constantly stated that because principal reductions would result in losses for Fannie and Freddie (an argument that was itself challenged by a very unlikely source just last week), the Treasury could have enough sway to get the program finally moving.

Plus, the write-downs would not require any additional taxpayer funds, with the $700-plus billion bank rescue package providing the financial resources.

According to the Journal, DeMarco has been in talks recently with Treasury Secretary Timothy Geithner on a principal reduction plan.

“There’s a set of homeowners who are deeply underwater and experience a hardship where it is better for the taxpayer to reduce principal,” Geithner said in the article. “It’s not an overwhelming number. But where it makes sense to do it, we should do it.”

That common sense approach, said Paul Willen, a senior economist with the Federal Reserve Bank of Boston, is what should drive the policy.

“The bottom line is, if you can get the payment down to a reasonable level, people do not generally default on their mortgages,” Willen said.

There are still detractors, though, who see a more philosophical component to the issue, such as Michael Barr, an assistant Treasury secretary who, the Journal notes, left the Obama administration at the end of 2010. Barr sees the strategic default approach (which we have covered extensively), even in the face of reductions, as being too tempting for some homeowners.

“For some of those people, just getting them an affordable payment is not going to do it,” Barr said. “There is too much going on in their lives, and they’re going to give up.”