What Do Housing Inventory Declines Say About the Market? 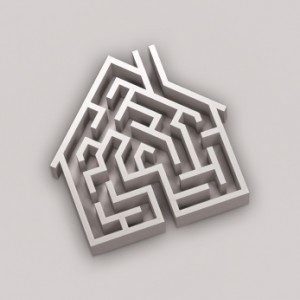 Has the housing maze to recovery grown even more convoluted?

Housing inventory declined yet again in March, and real estate analysts are debating its implications for the wider housing market.

Based on the latest numbers from the National Association of Realtors (NAR), inventory declined from 2.40 million in February to 2.37 million in March, which is a 21.8 percent decline from March 2011 and a 3 percent increase from March 2005, the last month of “normal” inventory levels before the housing boom began to subside.

Writing about the inventory declines on his blog, Bill McBride dubbed the decreases “a significant story over the last year,” and wrote there are several causes for its fall.

One reason is the nature of the current listings. Short sale contingent listings, which are usually never included on the MLS, are not counted in NAR’s reports on inventory, so those sales are not factored in to the most widely-cited levels for inventory. Another reason is pent-up supply. Many sellers, discouraged by the dramatic price declines that have occurred in recent years, have taken their homes off the market and are waiting for prices to recover.

Another still is the seasonal pattern for inventory – December and January typically have the lowest inventory levels for the year, and as the weather gradually warms up, inventory increases – and finally, foreclosures have declined markedly in the last 18 months, and REO inventory has fallen substantially, though it is expected to pick up in the wake of the mortgage settlement (McBride guesses it will add 200,000 REOs to the market).

Regardless of the reasons, McBride was quite positive about the trend.

“The bottom line is the decline in listed inventory is a big deal, and will take the downward pressure off of house prices,” he wrote. “Just like last year, inventory will be something to watch closely all year.”

Diana Olick of CNBC, though, had a much different take on the matter. Complementing the fall in inventories with the 5 percentage-point decline in distressed sales that NAR reported, Olick wrote that the supply of short sale and REO properties – which she pegs as the center of real estate activity in the current market – has fallen more than expected after the mortgage settlement, with banks now taking more time to process and, if possible, modify loans and avoid the foreclosure process altogether.

Because the supply of those homes is falling, and the one true area of demand in the housing market is not being satisfied, prices could actually fall with supply, not rise, as is the typical expectation of supply and demand.

So which side is right? Do falling inventories mean the market is absorbing excess supply, as McBride suspects, or is the one savior of an increasingly off-kilter market now depriving its customers, as Olick fears?