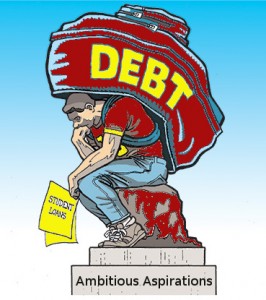 Student debt is skyrocketing, and it's posing some challenges for the homebuying process.

In survey after survey, Americans reaffirm their interest in owning a home, but a new obstacle is hindering that dream for recent college graduates – student debt.

Now totaling more than $1 trillion, according to a recent report from the Consumer Financial Protection Bureau, student loans have now surpassed the amount owed by all credit cards in the U.S., and as the New York Times explained in a recent story on student debt, such a financial burden can pose problems for students when they enter the workforce and pursue homeownership.

Cari Sweet-Kostoplis, an assistant vice president of the Jersey Mortgage Corporation in Parsippany, said some of the debt burdens she comes across are steep.

“Some student loan payments are as high as a mortgage,” she said, adding that one graduate, facing monthly payments of $2,800, took a job as a prison psychologist to qualify for a debt forgiveness program.

In 2011, students took out $117 billion in federal loans alone, and according to College Board stats cited by the Times, out-of-state tuition fees and room and board at a public university now cost $29,657; for private institutions, it’s up to $38,589.

Debts of that level, Sweet-Kostoplis said, can pose particular problems for graduates seeking loans. A typical mortgage and taxes can be expected to consume 33 to 35 percent of a homeowners adjusted gross income. Considering that lenders follow underwriting guidelines that typically limit total debt payments to 45 to 50 percent of the borrower’s income, that would leave just 10 percent of income for student loan payments, credit card bills and other debts, or $833 or so for someone making $100,000 a year, according to a Times computation.

Carmen Rodriguez, a broker with Coldwell Banker in Edgewater, said the reality of student debt obligations places new emphasis on “serious financial planning” when agents are in the consultation phase with their clients.

“Agents may assist in sorting information and devising plans tailored to the needs (and finances) of our clients,” Rodriguez said via email. “So whether it’s student debt or any other issue, agents are critical to the process.”

Rodriguez also said that since she started in real estate, she has seen the number of graduates with high debt burdens rise “very much so,” and with it the challenge of finding the right financing options for the buyer.

The Times ran through a number of options graduates could pursue to pay off their loans, including consolidations through Sallie Mae, extensions of the length of the loan and home equity loans that, when taken out by family members using their mortgage as collateral, often carry lower interest rates than the initial student loan.

Or, as David Boone, a first vice president of Provident Bank in Jersey City, N.J., explained it, graduates could pay off their debts as quickly as possible and refrain from taking on any new debts.

And what about you? Have you worked with any clients recently whose homeownership aspirations were complicated by student debt?