Ben Milam Hotel Will Be Imploded This Sunday 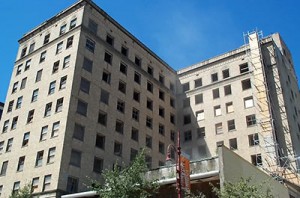 The Ben Milam Hotel will be imploded this Sunday and replaced with a luxury residential complex.

The old Ben Milam Hotel will be imploded this Sunday at 12:30 p.m by demo firm, D.H. Griffin of Texas. The 10-story building across from Minute Maid Park will be replaced with a luxury residential complex, built by apartment developer the Finger Companies.

Historic Ben Milam Hotel Has Been Vacant for Years

The Houston Chronicle reports that the 80-year-old building at 1521 Texas has been vacant since the 1970s. It was built to house traveling salesmen who came to town by train through Union Station across the street.

“Obviously, that building represents a certain type of hotel. It’s another one of those railroad, itinerant buisness-persons hotels,” he said. “On the other hand, I’m painfully aware that a number of people have looked at that building and tried to make economic sense. I don’t think they’ve ever been able to make it go together.”

According to Larry Grisham, senior vice president of demolition firm JTB Services, the implosion for a building like the Ben Milam Hotel could cost as much as $200,000. Prep work and clearing the property could more than double the price.

The last structure that was imploded in downtown Houston was the Montagu Hotel at Fannin and Rusk in 2008. The previous implosion was more than 20 years earlier.

Apartment Complex Will Replace the Hotel

Finger and Companies is planning a 380-apartment complex on two contiguous downtown blocks, one of which will hold the old hotel. They considered repurposing the building, however structural elements, such as low ceilings, would present challenges.

“Structurally, it just doesn’t lend itself to a modern residential tower,” Marvy Finger, President and CEO of the Finger Companies, said.