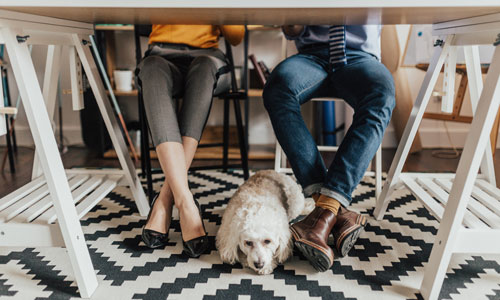 Feeding, cleaning up after, visiting doctors, taking trips to the playground. Yes, dog ownership is much like caring for a child, but it’s still often shrugged off as less of a commitment than parenting a human — some even call canines “starter children.”

However, a recent survey shows a surprising result of dog ownership: It’s cited more frequently than marriage and children as a reason millennials have purchased a home.

The SunTrust Mortgage Survey, conducted by Harris Poll, found that 33 percent of millennials aged 18 to 36 said the desire to have a better yard or space in general for a dog factored into their decision to buy a home. Among surveyed millennials who haven’t yet bought a home, 42 percent said current or future dog ownership will be a key factor in a future purchase.

And given that, according to a 2016 CDC report, the percentage of females who have infants now is the lowest in recorded history, millennials are choosing instead to dote on their dogs as they would children.

“Millennials have strong bonds with their dogs, so it makes sense that their furry family members are driving home-buying decisions,” said Dorinda Smith, SunTrust Mortgage President and CEO. “For those with dogs, renting can be more expensive and a hassle; home ownership takes some of the stress off by providing a better living situation.”

Everyone knows dogs love treats, belly rubs and hogging the bed at night, but what amenities might homebuyers look for to accommodate Rufus? According to an NBC News report, at the top of the list are nearby dog parks and trails chock full of features such as: