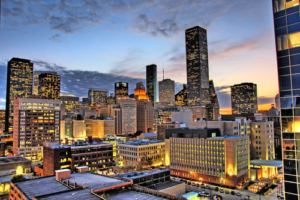 Downtown’s Barbara Jordan Post Office, originally opened in 1962, will undergo a long-anticipated redevelopment. The 550,000 square foot building was purchased by Lovett Commercial in 2015 and has served as a multipurpose venue for area events including the now defunct Day for Night festival. Lovett will unveil official plans at the groundbreaking ceremony slated for June 26th but has confirmed the property will become a mixed use development showcasing restaurants, shops, music, and art.

A report released by MagnifyMoney found that Texas has the second highest rate of bachelor-degree holding workers moving into the state, just behind Florida. Texas’s warm climate paired with a low cost of living attracts educated workers from cold and costly states like New York and Massachusetts and bordering states Louisiana, Oklahoma, and New Mexico, all of which have a negative net flow of educated workers.

According to KHOU, Harris County is working with FEMA to update flood risk maps that were originally drawn nearly 20 years ago, following Tropical Storm Allison. New technology and recent rain data will result in more accurate and detailed maps. The project should wrap up by 2021 and residents will be able to type in their address and receive pinpoint flood risk information.

Gated community opens in the GOOF