The worst is over, says NAR Chief Economist Lawrence Yun 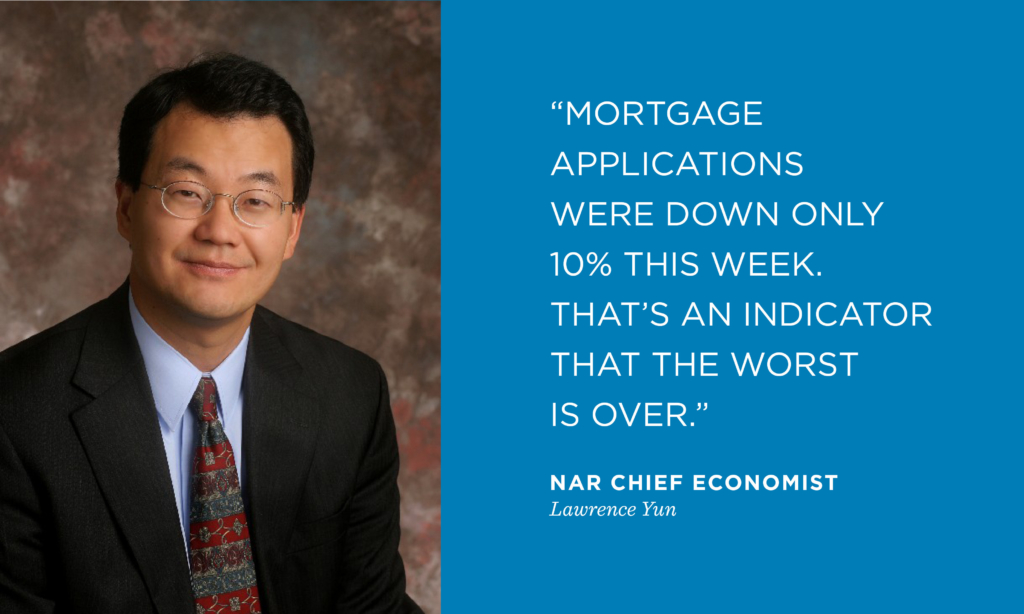 Addressing the coronavirus epidemic’s impact on the economy at NAR’s midyear forum this month, Yun predicted a gradual improvement in unemployment numbers as lockdowns end, allowing more Americans to go back to work.

While Americans are already coming off of unemployment at a rate of about one million per week, another three million are filing for the first time. That’s expected to change when schools, daycare facilities, surgical centers, and doctor and dentist offices reopen, allowing education and health care workers to return to their jobs. The health-care sector alone lost 1.4 million jobs in April, with half a million jobs cut from dentist offices and nearly a quarter-million cut from physicians’ offices.

“Those areas are expected to improve once the lockdown ends,” Yun said, noting education and health represent the second-largest number of jobless claims after leisure and hospitality. “At least 80% of job losses right now are temporary.”

One factor that might be holding back some unemployed workers is the fact that the average unemployment check is currently higher than the average wage that worker had been receiving. However, that situation will change at the end of July, when the $600-a-week booster shot from the federal government is set to expire. “There will be an incentive to return to work,” Yun said.

For now, Americans’ incomes are growing and so is their savings rate, which has increased 152% since the pandemic began. “People are saving money and waiting for the economy to reopen,” Yun said. “Why not put more money under the mattress just in case?”

What they’re spending their money on has changed, too. Instead of buying clothing and going out to eat, Americans are spending money and time upgrading their homes so they can maximize their values. It is a wise move, because Yun expects the end of the lockdown to bring an influx of buyers. “Right now, we’re seeing new listings popping up in Georgia, and they’re being grabbed quickly by buyers,” Yun said. “Between 60% to 70% of Americans have secure jobs right now and are trying to take advantage of low mortgage rates.”

The inventory shortage that plagued the market prior to the pandemic and subsequent pent-up demand, especially given historically low interest rates, are expected to fuel the recovery. “Home prices appear to be rising just as if we were in a pre-pandemic period,” Yun noted.

Yun expects to see further declines in pending contracts when April data is available, “but that’s the bottom,” he said. “May should go up — not the same as last year, but still an improvement.”

One way to gauge the direction of the real estate market is to look at the number of mortgage applications, which seemed to have bottomed out in mid-April. “Mortgage applications were down only 10% this week,” Yun said. “That’s an indicator that the worst is over.”

Yun expects the recovery will be fueled by sales of homes priced in the low-to-mid-range category, especially if mortgage rates decline further (Yun expects rates to go to 3% later in the year).

Regionally, the Midwest and South are expected to do better, while recovery will be slower in the West and worst in the Northwest.

Markets that have been hit with the double whammy of the pandemic and the oil price collapse are expected to take longer to recover. “It’s going to be tough,” said Yun. “They just need to hang on.”

Addressing comparisons to the Great Depression, Yun said this situation is very different. “This was caused by a government-imposed economic lockdown and the job losses were quick. During the Depression, job losses occurred over a long period of time. This is a completely different picture.”

While recovery is expected to take place during the third and fourth quarters of this year, “everything lights up in 2021,” Yun predicted.