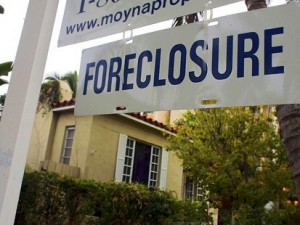 Members of Congress could attempt a radical measure to speed up foreclosures.

States with the slowest foreclosure processes might see their federal funding suspended until conditions improve, according to HousingWire’s Jon Prior.

“We are foreclosing on properties that have had no payments for two, three years or more. It’s damaging the taxpayer because we have to maintain these properties for so long and it’s damaging to our communities,” DeMarco said.

A possible solution, proposed by Rep. Darrell Issa, R-Calif., would be to withhold funds from the states with low foreclosure turnaround rates. Issa, who is also chairman of the House Committee on Oversight and Government Accountability, asked DeMarco for a list of states whose foreclosure processes directly affected Fannie and Freddie losses.

For foreclosures completed in the third quarter, the process took the longest in New York, where it averaged 986 days, according to RealtyTrac. New Jersey followed with an average of 974 days, then Florida with 749 days.

The shortest processes occurred in Texas at an average of 86 days, followed by Kentucky with 94 and Virginia with 102, according to RealtyTrac.

“While these states have been overloaded with filings during a time when cramped budgets keep local courthouses from hiring new staff, the fault is not entirely their own,” according to a Housing Wire report. “Servicers and foreclosure attorneys last year were found to be filing fraudulent documents en masse in order to speed up the process. Instead, foreclosures came to a halt in many states, especially Florida.”

DeMarco was asked at the House meeting when Fannie and Freddie would repay the $151.7 billion they owe in dividends to the Treasury.

“I don’t believe either company will be able to pay back the funds,” he said. “Unless we keep this conservatorship going for my children and beyond, then no.”