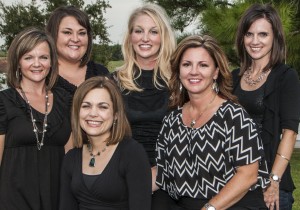 Amy Lippincott has five years of real estate experience, specializing in northwest Houston neighborhoods, including Cypress, Spring, Katy, Tomball and Montgomery. She comes with a team of four other agents–Natalie Johnson, Ginger Sims, Marcia Brittain, Aimee Wiesner–and one full-time assistant, Jennifer Locklin. The agents specialize in a variety of areas, from luxury real estate to foreclosures.

“We’ve signed an extremely successful real estate team,” he said. “The Amy Lippincot Team members are known for providing outstanding customer service, and we are all looking forward to working with them.”

How the Lippincott Team Formed

Lippincott taught physical education at a local elementary school for 16 years before deciding to make a career change to real estate. She was satisfied with her new career, but she missed the social environment of the school.

“I was so used to being around lots of people,” she said. “So I asked a neighbor to work with me, and then we found another agent to join our crew. It just grew from there.”

Lippincott said she chose to work with agents who would help each other build the business. Half of the team is made up of former teachers, and all live in the Bridgeland subdivision.

“It’s no longer about the house in real estate; it’s about the community,” Lippincott said. “We all know the Cy-Fair area well. Our kids go to school here, and we are tied into the community.”

The Lippincott Team invites friends, neighbors and those looking to relocate to stop by their office, located at 11734 Barker Cypress #116 in Cypress. Contact Amy Lippincott by emailing  [email protected] or calling 832.392.8818.

Roll over, homebuyers: New survey reveals how people choose houses based on their pets