Appraisers cite lack of pay, glut of regulations as reasons for leaving 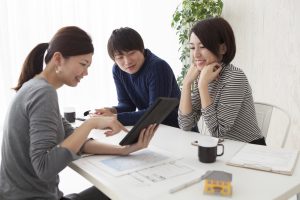 A shortage in appraisers is accepted as fact by many in the real estate industry, with one appraisal management company executive describing the situation to CNBC as a “massive” shortage. Studies on the number of appraisers indeed show a decline, but a March 2017 survey of industry experts done by the National Association of Realtors shows the current situation is not as dire as some would suggest.

There has been a reduction in licensed appraisers since 2007, when 82,635 appraisers were thought to be working, according to the National Appraisal Congress. The group reported 60,747 appraisers in 2014, an overall reduction of 28 percent. But the industry hit a high point in 2007, at the start of the housing market’s collapse, and the shedding of jobs since then can be chalked up to a combination of market factors and industry barriers. In fact, 2014’s number of licensed appraisers is not far from 2004’s 65,821 working appraisers, according to the National Appraisal Congress.

The decrease in appraisers has led to longer closing times and an increase in the turn-around time expected by clients, with the average home purchase turn-around jumping by 79 percent in recent years, according to the Stratmor Group, a mortgage industry consulting firm. Still, appraisers responding to NAR’s survey said that their work is largely unchanged in recent years, with a majority of survey respondents saying they handled the same workload last year and with 48 percent being satisfied with their workload. But with the relatively advanced age of most appraisers and the lack of trainees, a shortage of appraisers could have dire effects on the industry in the coming years. 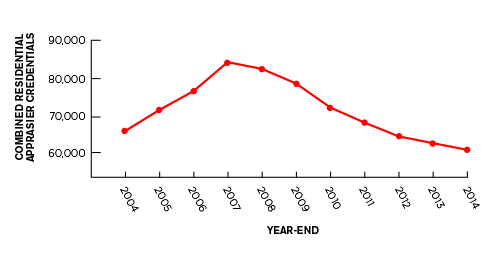 The number of credentialed appraisers from 2004-2014, according to the National Appraisal Congress.

Portrait of an appraiser

Of the 2,248 appraisers and former appraisers who responded to NAR’s survey, the average age is 54 years. (More than 60 percent of appraisers are over the age of 50, according to the Appraisal Institute.) They’ve spent an average of 21 years in the industry, and nearly 86 percent of respondents said they intend to stay in the field for at least five more years.

Appraisers are also crunched for time, underpaid, unhappy with industry regulations and largely unwilling to train their future replacements.

Perhaps that’s why 50 percent of surveyed appraisers say they are not satisfied with their compensation, according to NAR. Appraisers are also worried about the increasing prevalence of technology in the field, with 67 percent saying they are unhappy with the use of data-driven valuations and with 64 percent upset about the increased use of appraiser scoring.

So why are appraisers less willing to train? For one, appraisers are too crunched to take on other responsibilities and are unwilling to do it without adequate compensation. Mostly, though, the reason has to do with regulations.

New federal rules enacted in 2008 after the housing market collapse stipulated that a trainee cannot do full appraisals, requiring the licensed appraiser to be on-site for all home inspections. That has reduced the market for a trainee’s services, and therefore the desire of appraisers to train them. At the same time, trainees need 2,500 hours of experience in two years, something that is much harder to achieve now that they can’t fully appraise homes. Plus, of the work trainees can provide, nearly 40 percent say their clients rarely or never accept a trainee’s work. Those factors also may be inhibiting people from entering the industry as a trainee, according to experts.