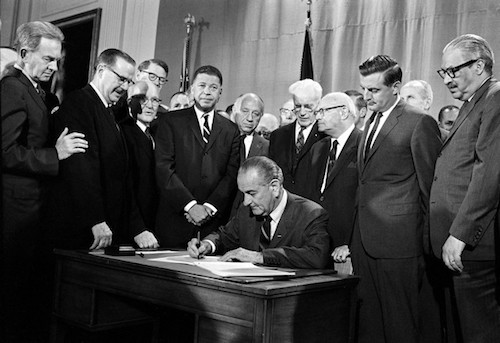 On April 11, the U.S. Department of Housing and Urban Development (HUD) will mark the 50th anniversary of the Fair Housing Act at a ceremony in Washington, D.C. However, some of HUD’s recent actions have received a significant amount of criticism over the past month, including an attempt to scale back federal initiatives that fortify the fair housing laws meant to ensure access to inclusive and decent homes for all Americans.

The Fair Housing Act ensures equal and fair housing for all Americans, making illegal attempts of racial, ethnic and income segregation in federally subsidized housing development projects. Later, the act was amended to prohibit discrimination based on sex, disability and familial status.

Secretary Ben Carson spoke on the legislation and the work HUD continues to do to ensure fair, inclusive housing free from discrimination for all Americans.

“It was a seminal moment in our country’s history when the ideals of equality and fairness were embodied in a law that continues to shape our communities and our neighborhoods 50 years later,” Carson said. “But the promises of the Fair Housing Act require our constant vigilance to confront housing discrimination in all its forms and to advance fairness on behalf of those seeking their American dream.”

However, HUD has recently faced criticism for actions that some say go against the Fair Housing Act. The New York Times reported last week that Carson told members of the Senate Banking Committee that he planned to delay a rule that would require local governments to create detailed plans to integrate racially segregated neighborhoods. Meanwhile, a provision that was included in the 2018 spending plan passed last week by Congress bars municipalities from using federal funding for such programs.

The Huffington Post reported in March that Carson planned to change HUD’s mission statement to omit promises of inclusion in discrimination-free communities.

Dismissing abandoning the agency’s fair housing mission, Carson struck the words “inclusive” and “free from discrimination” from the HUD’s mission statement in a March 5th memo addressed to HUD political staff. The new statement is explained as an update “in an effort to align HUD’s mission with the Secretary’s priorities and that of the Administration.”

Although Carson responded to critics by saying “You can be sure of one thing — any mission statement for this department will embody the principle of fairness as a central element of everything that we do.”

However, Democratic California Representatives Sen. Kamala Harris and Sen. Dianne Feinstein, are calling on HUD to ensure that the words “free from discrimination” are not removed from the future mission statement and are asking for a response from Carson by April 9.

“HUD must lead by example and commit to expand its work in eliminating housing discrimination, in which HUD has been a champion,” they wrote in a letter to Carson. “These changes to the HUD mission statement would erase decades worth of progress and bring back an era in which people were denied housing based on the color of their skin.”

The department also halted projects meant to protect the LGBTQ community from discrimination, as well as an initiative of “self-sufficiency” for low-income Americans, who Carson said he doesn’t want to get “too comfortable” in their homes.