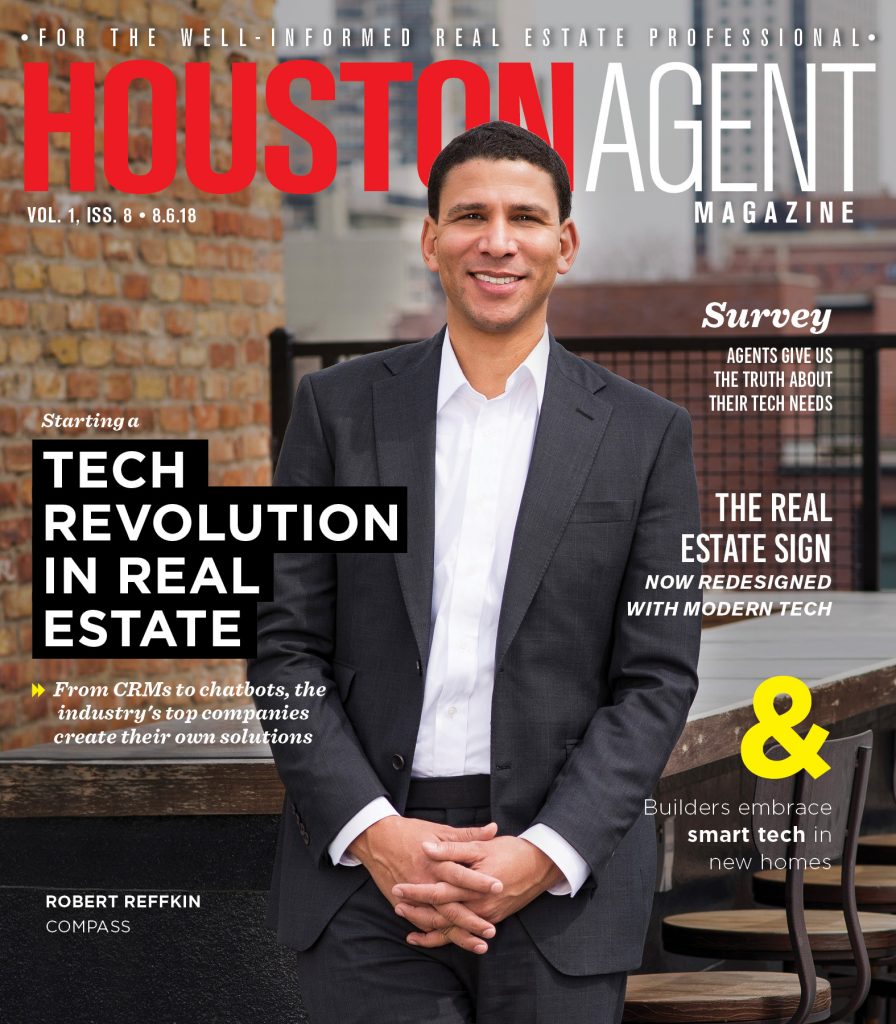 It wasn’t too long ago that the latest trends in real estate technology were virtual reality tours and drone photography. Now, agents are having to explore what were once far-out concepts like artificial intelligence, machine learning, geofencing and blockchain. There has been an explosion in recent years not only of the technology available to agents, but also the money being poured into the tech side of the business.

In 2017, investors spent over $5 billion on real estate technology, a significant increase from $33 million in 2010, according to Forbes. The money is being invested not because the buying and selling of homes is increasing as a portion of the economy. Rather, it’s because the real estate industry is fragmented, saddled with regulations and often slow to innovate.

In other words, it’s been an industry poised for a technological takeover. There are plenty of investors and startups seeking to do just that, while the traditional industry powerhouses remake their in-house technology divisions to keep up. And while the change and “disruption” — the favored term of technologists and venture capitalists — can be daunting to some, the overall goal is to make buying and selling homes as smart and easy as possible, for both agents and their clients.

Now more than ever, brokerages are looking for technological advances to gain an edge over the competition. Consider the rapid rise of Compass, a startup brokerage with a focus on developing cutting-edge technology, which has led to a nearly $2 billion valuation and the signing of 2,000 agents since 2016.

Compass has committed to cutting down on the inefficiencies in the real estate industry so that its agents have access to an easy-to-use platform that houses all the tools agents need to make more sales and advance their career, says founder and CEO Robert Reffkin.

Read more from our Tech issue

Compass is currently touting a new customer relationship management (CRM) platform expected to launch in the third quarter of 2018. While there are more than 30 CRMs on the market today, Compass will have the first to compile clients, listings and transaction information on a single platform, Reffkin says. The CRM will incorporate some of the company’s existing tools, including the insights tool, a dashboard that provides agents with up-to-the minute data on web traffic for their listings; and the collections tool, a client-facing visual portfolio that allows clients to communicate with agents in real time, as well as see pricing and status updates on properties they’re interested in.

Compass is well-prepared to help usher in a new, more technological era in real estate, Reffkin says. “We believe in a future where the experience is integrated, where everything you need to buy and sell homes exists in one place, on one platform,” he says. “Someone in real estate will create that one platform through which all real estate transactions happen. It’s not a matter of if, but a matter of who. Will it be a company that wants to empower agents? Or one that wants to displace them? We believe in ourselves and a future where agents are empowered, not displaced.”

Consider also that the nation’s biggest real estate franchise, Keller Williams, has essentially rebranded itself into a technology company with the hopes of becoming — in the words of owner Gary Keller — “the Amazon of real estate.” To do so, Keller Williams created KW Labs, the franchise’s innovation hub, and hired  as its director Adi Pavlovic, a former technology consultant who had no prior real estate experience.

KW Labs works as a product development incubator that leverages the knowledge of more than 159,792 Keller Williams agents to build new technology that will make their jobs easier.

“We’re the largest brokerage, so we should also be the smartest,” says Pavlovic. “We’re no longer building technology for the agents. We’re building it with them.”

One of Keller Williams’ greatest developments to date, according to Pavlovic, has been the creation of Kelle, a virtual assistant for agents. The technology is essentially a task manager for agents, and it seeks to consolidate the dozens of technology tools agents use on the job. For example, agents can ask the app about the status of their referrals or to list the contacts that the agent has not reached out to in three months.

The idea for the virtual assistant came from an agent, Pavlovic says.

“Somebody had an idea of Siri for real estate,” he says, referencing Apple’s artificial intelligence system for its devices. “We started asking, what kind of questions would you ask a Siri for real estate? We’re constantly getting feedback. The more questions we get that Kelle doesn’t know, the smarter it becomes because of computer learning. We’re working on what future versions will look like.”

Artificial intelligence has long been the domain of sci-fi thrillers and college classrooms, but the technology is impacting the real estate industry today in various capacities. There’s Keller Williams’ virtual assistant, which is on the cutting edge of AI use in real estate, and then there are chatbots, which have been adopted by virtually everyone in the industry.

Though chat icons have been on brokerage websites for years, the technology has advanced greatly in recent years. In the near future, artificial intelligence will shape every aspect of the industry, Pavlovic says.

“Chatbots are the first entry into artificial intelligence,” he says. “Over the next three years, you’re going to see companies leverage AI to be smarter about analytics, predicting what might happen with a home or an offer.”

Reffkin agrees that AI will play a big role in shaping the industry’s future.

Technology has not only become a bigger part of a brokers life, but it has also had the same affect on broker-owners.

James Krueger, broker-owner of Krueger Real Estate, knows about the sizable investments industry giants are making in technology. And while he knows there is only so much he can do to compete, Krueger knows that he has to stay on top of emerging technology.

“I’m getting bombarded pretty much daily with new product and technology offerings,” he says. “I’ve learned to take it one day at a time and with a careful eye. We’ve always got to look at what’s out there, what other tools can help us grow and help out agents be more successful.”

One new technology he is excited about is actually a product of the Houston Association of Realtors, which has launched a “car mode” on its app that lets agents or consumers access hands-free information on properties they pass in the car. And while Zillow is looked at by some agents as the worrisome wild card in the industry’s future, Krueger says he is excited by the site’s standardization of housing data.

New technology, however, is not always better, and unwise investments can prove costly, Krueger says. One example is the 3-D “tour” of a home, which was unceremoniously made obsolete by the video tour. Krueger bought the special 3-D camera only to learn that fact later.

“I see a lot of fads come and go,” he said. “For example, the text for info, for a little bit there QR codes where a huge thing and that came and went pretty quickly. With this technology, we have to ask, is it really going to advance things?”

Krueger has seen technologies come and go over his career, but one constant has been the agent-client relationship, he says. So, while technology has become and increasingly important pat of his job, it cannot supplant the work of building and managing a client base.

“At the end of the day, technology only does so much for us,” he says.

Why are all of these technological advances sweeping the industry? Because companies are starting to attempt to solve the one problem that has plagued innovation in real estate.

The industry is too fragmented, with too many local regulations, diverse trade groups and diverse data collection, experts say. The data collection problem is key, because uniform data sets are needed to create centralized, smart platforms that can provide the insights and information agents need. Much of that data is stored in the 800 multiple listing services in the U.S., which do not keep the same records or provide the same data.

“The real estate industry is incredibly fragmented today,” Reffkin says. “This fragmentation causes friction in the experience for everyone — agents and their clients alike.”

Pavlovic says the person or company who solves the data challenge will be able to provide the best and most data-driven technology to its agents and clients.

“Organizations are trying to standardize that area, but there are challengers,” he says. “There’s a lot of cost and collaboration required. That’s one of the biggest challenges the industry has, is centralizing the data sources. Without that data, it’s extremely hard to build anything of value. It’s such a huge valuable piece to building any kind of technology product in this industry.”

Krueger says data centralization is one of the future advances that is not only conceivable but also a win for agents and clients.

“A lot of the industry is trying to brace for some major changes coming up,” he says. “At some point, I think we could see a standardization of data.”

Though technology stands to be an increasingly important factor in the real estate industry, there is still no replacement for the expertise of an agent.

“Delivering a great customer experience is ultimately what its all about,” Krueger says. “You still have to have that human touch. No technology out there is gonna replace that guidance we give to a client.”