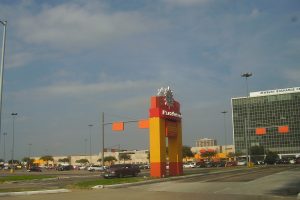 PlazAmericas, formerly known as the Sharpstown shopping center in the Sharpstown neighborhood of West Houston, has a new owner that’s looking to revitalize the aging mall. Houston-based Baker Katz principal Jason Baker told the Chronicle that the plan is to increase occupancy at the center, which is now only about 70 percent leased.

“There’s definitely a viable strategy of maintaining its current form and having an eye on the future for when it’s subject to fewer restrictions,” Justin Segal, president of Boxer Property Management Corp., a previous manager of the property, told the Chronicle. Baker noted to the newspaper that his firm plans to remain owners of the property for a long-term period, rather than putting it on the market after a just a short period.

In other local real estate news:

•LGI Homes announced its newest Houston-area project Thursday. Freeman Ranch will be located in Katy, near both the Grand Parkway and I-10 and will include 840 new homes. The development will feature homes with single-story and two-story floor plans ranging in size from 1,300 square feet to over 2,600 square feet, and priced from the $170s. LGI is spending $1.25 million on amenities for the development in 2019, including a private neighborhood park with a party pavilion, walking paths, and a splash pad.

•The latest ranking that Houston can boast topping comes from technology staffing firm Robert Half Technology. The firm commissioned a survey of over 2,800 information technology decision makers across 28 major U.S. markets, asking them a variety of questions about their staffing needs. Fully 80 percent of those surveyed in the Houston market said they planned to expand their teams in the first half of 2019. Charlotte, Phoenix, Chicago and Dallas rounded out the rest of the top five cities on the list—each with at least 75 percent of respondents saying they expected to add staff in Q1 or Q2 of the new year.

•Bond Collective, a New York-based coworking firm, is the latest shared workspace provider to enter in Houston market. The company signed a lease for a 26,000 square foot space at Pennzoil Plaza, at 711 Louisiana Street, downtown. Bond is expanding in the Austin, Brooklyn, Chicago, Nashville, Philadelphia and Washington, DC markets.