Houston’s First Co-op Attracts Residents from all Walks of Life, Joining in the Mission of Sustainability

In addition to Houston’s various slated construction plans, over 600 completed high rises, and the expectations that Texas contains many of the largest U.S. boom towns, Houston may have another development turning heads in the near future. Houston installed its first ever co-op, called Rosalie HAUS (Houston Access to Urban Sustainability), located at 3015 Richmond Ave. 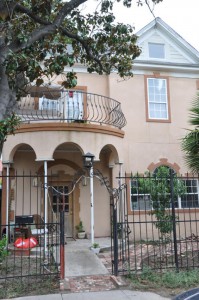 This co-op is different than those co-ops that may come to mind, having earned a poor reputation in the ’70s. The residents in this new co-op are, “A collection of clean-cut, young professionals set on offering Houston a more environmentally sustainable way of living. A lawyer, an oil customer service rep — hell, even a neuroscientist — call Rosalie Haus in the Third Ward home,” said Houston Press.

The 10 residents of this home, founded by Jay Crossley, now seek to “prove that intentional communities like co-ops will work in Houston,” said Houston Press in another article earlier this month. Not only do they think they can work, but they plan to expand–aiming to construct four more green co-ops by 2016, hoping to embrace a family designated model, a college geared co-op, and more.

The ambitious group also reportedly plans to pursue neighborhood amenities such as bike shops and a veggie-oil gas station, according to the article.

If you couldn’t tell by the future plans, one of the primary focuses of the HAUS project is environmental sustainability. The Rosalie Haus co-op has a wide array of features geared at: energy conservation, water conservation, renewable energy, material reuse, efficient transportation, local food, and chemical free living–all of which are described in detail here, on the HAUS blog.

Not all are thrilled by the group’s prospects, with State Representative, Garnet Coleman saying to Houston Press, “Ten in one house is a lot,” he continued. “What is the purpose of doing this? What do they call this stuff — new urbanism? Is that what this is supposed to be?” Coleman emphasizes that he supports the environmentalism, but he remains skeptical that this trend will catch on–especially with African American professionals, who want “privacy and a yard.”

Among the several missions HAUS mentions, one is to “educate the general public about cooperative organizational principles and greener, more sustainable lifestyle options.” This co-op should effortlessly achieve this mission, as curious residents continue to weigh in on this unique project. While this project will certainly not please all Houston residents, at minimum it serves as a shining example of green efforts, and for that it should be applauded.