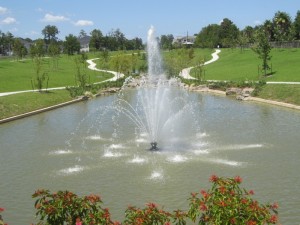 The Mandolin Gardens Park was one of the honored developments in the Urban Land Institute's awards.

Three urban planning projects received the top honors at the Houston District Council of the Urban Land Institute’s 2012 Development of Distinction Awards last week for their design, construction and general improvement to the community.

According to a Houston Chronicle piece on the ceremony, a jury of outside experts chose the winners from a number of finalists that were themselves selected by local real estate leaders. The finalists competed in three categories – for-profit, non-profit and heritage.

In the for-profit category, the CityCentre development, by Midway Cos., took the first-place prize. A combination of residential space, retail strips, restaurants and even a hospital, the development, which is near Beltway 8 and the Katy Freeway, uses a central plaza with a myriad of trees and benches to promote a pedestrian-friendly, antiquated atmosphere.

Greg Erwin, who heads of the Real Estate Development and Investments Practice Group for Winstead attorneys, said CityCentre can serve as a blueprint for urban areas.

“It’s a blueprint for what the urban development in Houston is going to be like and needs to be like to accommodate our growth over the next 20 years,” he said.

The Gulfgate Center, a development by Wulfe & Company, also received for-profit honors for creating jobs and spurring other developments in its area near the Gulf Freeway and Loop 610.

“We took an area that was underserved and underdeveloped and in poor condition and changed the whole area,” said founder Ed Wulfe in a video of the project. “It became a focal point of the East End.”

On the non-profit side, Mandolin Gardens Park was awarded top honors. A Harris County Municipal Utility District No. 230 development in northwest Harris County, the project saved the area from a planned drainage ditch and detention pond and has raised home values in the area.

“All three of these did a really good job of being greater than the sum of their parts,” Erwin said.