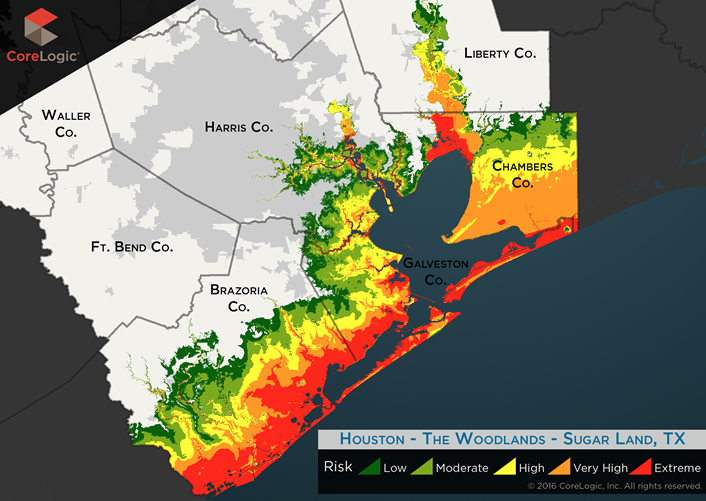 The recent flooding in Houston is not so much a wake-up call about the city’s flood vulnerability, but more a reminder: Houston takes on water easily – a fact confirmed in CoreLogic’s 2016 Storm Surge Report, released today.

The report found that along the Atlantic and Gulf coasts, more than 6.8 million homes face a potential risk of damage from hurricane storm surge inundation (i.e. flooding). Assuming a worst-case, 100-percent-destruction scenario, CoreLogic estimated the reconstruction cost value (RCV), or what it would take to rebuild the property, at $1.5 trillion.

The extremity of the risk jumps from location to location, depending on various geographic factors. But at the state level, the research group found that Florida and Texas’ extended coastal areas make them both particularly vulnerable.

Along the Lone Star State’s eastern coast, more than 500,000 homes bear the burden of at least some potential risk of hurricane-related flood damage, and more than half of those properties are in the Greater Houston area.

More than 280,000 Houston homes are located within CoreLogic’s designated “storm surge risk zones” this year, and of those, 118,033 face at least a high potential risk. The estimated RCV for all the homes located within the risk zones is $51.8 billion.

Houston represents the No. 7 most at-risk city in the country.