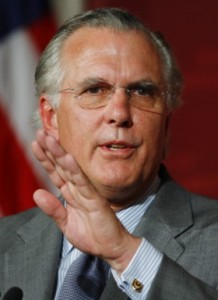 In an unorthodox move that resists recent narratives on the supposed benefits of historically-low interest rates, Dallas Federal Reserve President Richard Fisher has come out against the monetary strategy, citing it as a probable reason for the economy’s sluggish performance.

Speaking at the annual meeting of the National Association of Business Economics, Fisher said the economy is flush with cash, particularly after a second string of Quantitative Easing by the Federal Reserve (a policy he did not support). What’s needed now is for businesses to step up and expand their operations.

“As I have said repeatedly, we have filled the gas tanks of the economy with affordable liquidity,” Fisher said. “What is needed now is for employers to confidently step on the pedal and engage the transmission that will use that gas to move the great job-creating machine of America forward.”

Fisher’s comments come as a surprise, particularly when the markets have been filled with news on how interest rates, week after week, have hit historical lows. Houston Agent has also reported extensively on upcoming revisions to the White House’s Home Affordable Refinance Program, which would take advantage of those same low rates and offer underwater homeowners the chance to refinance their loans.

“My colleagues and I are professionally beholden to beware of short-term fixes that might contradict, or place in jeopardy the long-term duty and credibility of the central bank,” Fisher said.

He was even quaint in his sign off: “With that, I’ll stop. And in the best tradition of central banking, I’d be happy to avoid answering any questions you might have.”