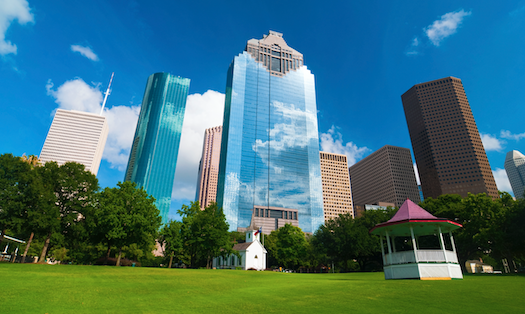 The modern homebuyer wants green space. For agents in Houston, that trend is a godsend.

“Green spaces in urban and suburban areas have typically been publicly provided amenities that have no set market price, but it has become increasingly common to evaluate them in terms of their monetary contributions to their surrounding communities,” said Natasha Catrakilis in an article for Duke University’s Urban Economics website.

The bottom line is that parks are good for your bottom line. Buyers want green space, and many are willing to pay extra for it. This is a major plus for Houston, as only three cities in the entire country have more acres of parkland, according to The Trust for Public Land’s “2015 City Park Facts” report.

In its “10 Best” series, USA Today listed the top parks in Greater Houston.

We selected our five favorites from that list, and took a look at the neighborhoods and home values surrounding them. In no particular order: 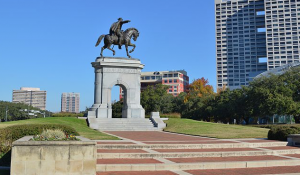 5. Hermann Park – Located in the Museum District, hugging the borders of Rice University (separated by Main St.) Hermann Park is a 445-acre park that, according to The Trust for Public Land, attracts more than 5.4 million visitors annually – putting it among the most-visited parks in the country. In the 77030 ZIP code in which the park is located, median home price is $339,000.

4. Cullen Park – Cullen Park is absolutely huge. It accounts for more than 9,000 acres of Houston’s total parkland, and is currently the third biggest municipally-owned park in the U.S.; and the tenth biggest overall. It borders another huge swath of parkland in George Bush park, and is situated in the heart of the city’s Energy Corridor – but also encroaches on Addicks, Memorial and Northwest Houston. While median home price within the ZIP code (77084) that houses the park is relatively low at $156,950, the amount of sales activity is significant. In the 12 months before March, 1,242 sales amounted to $206 million in total volume.

3. San Jacinto Battleground – The only state park on our list, the San Jacinto Battleground commemorates General Sam Houston’s defeat of General Santa Ana, and the day Texas gained its independence from Mexico. The park is located where the Buffalo Bayou runs into Burnet Bay, and offers a great vantage point of the Houston Shipping Channel. The park is located in the 77571 ZIP code, where median home price is $147,000.

2. Tranquility Park – Squeezed into a single city block next to Hermann Square and Houston City Hall, Tranquility Park offers downtown residents an escape from the urban surroundings, and a chance to reflect on one of the country’s greatest achievements: the moon landing. In 77002 ZIP code in which Tranquility is located, median home price is at $251,500 – above the city’s median. However, considering the park’s size, it would be hard to draw any correlative conclusions between the two. 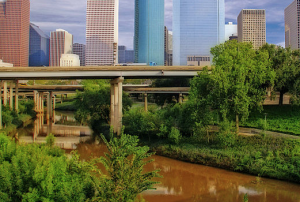 1. Buffalo Bayou Park – Situated along the Buffalo Bayou, the 124-acre park stretches across several of Houston’s premier neighborhoods, including River Oaks and Rice Military. The park is beloved by Houston’s residents, who have praised its many amenities online. And though no causal relationship can be assumed, there is certainly a correlation between the park’s position (in ZIP code 77019) and nearby home prices – the median of which is $533,250.

Buffalo Bayou photo by www.rodjonesphotography.co.uk [CC BY 2.0], via Wikimedia Commons