Houston home prices reach highest levels ever for a November 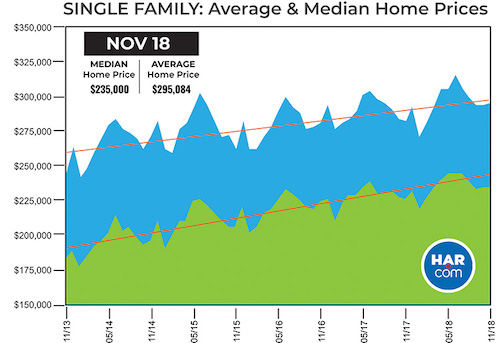 Even though home sales declined 2 percent in November year-over-year, Houston’s 2018 residential real estate market will still go down in the books as a more productive one than 2017, according to the latest monthly report from the Houston Association of Realtors. Looking at the year-to-date numbers in Houston, home sales are 4.6 percent ahead of 2017’s record volume.

Today’s positive report was by no means a given at this time last year, as HAR Chair Kenya Burrell-VanWormer with JPMorgan Chase noted. “The Houston housing market remains on track for another record year, which was an almost unimaginable concept when the year began, on the heels of so much devastation from Hurricane Harvey,” Burrell-VanWormer said in a statement. “As 2018 draws to a close, we see slow but steady growth in the supply of housing as well as a strong job market, which together make for a healthy real estate climate.”

Part of the increase is thanks to more homes being on the market; inventory just edged up from a 3.6-months supply a year earlier to 3.9 months this November. That’s still lower than the national average, however, which stands at a 4.3-months supply, according to the latest report from the National Association of Realtors.

But prices are on the rise too; November’s total dollar volume increased 3.9 percent to $2.1 billion. The median price of a single-family home increased 4.4 percent to $235,000, which the association noted as the highest ever for November. The one price segment that did not increase was for homes priced at $150,000 and below. At the other end of the market, homes priced at $750,000 and above increased the most, rising a whopping 12.3 percent.

As sales of single-family homes declined, so did those of townhomes and condominiums; November saw a drop of 2.8 percent in such sales. The median price for this segment increased 4.5 percent to $165,000. Inventory grew from a 3.7-months supply to 4.1 months.

Though sales did decline in November, the lease market in Houston was more active. According to HAR data, single-family home rentals soared 15.3 percent as rents edged down 1.3 percent to $1,743. Rentals of townhomes and condominiums rose a more modest 0.6 percent and rents bumped up 0.5 percent to $1,505.

Looking forward to the end of the year, HAR forecasts the market as being “on track to set new sales records when the books are closed on 2018.” Total active listings increased 8.9 percent this month to 40,530. Homes are also selling slightly faster this year, as days on market decreased from 62 last November to 60.